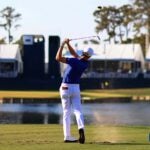 Here's what you can learn from Justin Thomas' last three holes at the Players.

Standing on TPC Sawgrass’ 16th tee box, Justin Thomas found himself tied with Lee Westwood at 13 under. In front of him laid one of the scariest closing stretches in golf — water on each hole and big numbers very well in play. If he could hold his nerve coming home, he’d be the Players champion. If not, he’d be another victim of Pete Dye’s diabolical design.

Thomas played his tee shot on 16 — a low, slinging draw — to perfection. It left him with a 5 wood in his hands into the par-5 green with water guarding the green. Again, he played the shot to perfection.

“To try to hit a cut off that upslope with a 5-wood which was already going to go high is something that I thought was tough, and to execute that exactly how we wanted was huge,” Thomas said. “How I played 16 was awesome today.”

He two-putted for birdie to take the outright lead. So far, so good. One hole down, two to go.

The walk from 16 to 17 is among the nerviest in golf. Fans surround the lake with a small green in the center of it, and with the island green repelling balls all weekend, the tee shot was all the more frightening.

Again, Thomas pulled off the shot, landing his wedge safely on the green. It left him with a dicey two-putt that he made look far easier than it was. All that stood between him and victory was the narrow par-4 18th.

Thomas selected a club he knew he would find the fairway with off the tee box, in this case a 5-wood. The ball started hooking ever so slightly, but thankfully stayed dry.

“I can’t lie, I thought it was very 50/50 or if it was going to be dry or in the water,” he admitted after the round. “It was too close for comfort, to say the least.”

Although his shot into the green was subpar by his standards, Thomas put himself in position to two-putt to victory capping a championship caliber close out.

There’s lots to learn from Thomas and how he managed his game down the stretch, but the most important is his ability to grind out pars (and a birdie) to run out the clock. When you get in situations similar to his, take a page out of his playbook.

Off the tee, play a club that you know will get the ball in play. In Thomas’ case it was a 5-wood, but any fairway finder will work. Once you find the short stuff, don’t go flag hunting unless you absolutely need a birdie. Otherwise, play for the fat part of the green.

Once you find the putting surface, do whatever it takes to get the ball in the hole. It’s easier said than done, but if you want to win, you’ll need to hole some nervy putts coming down the stretch.

These tips might not make you a Players champion, but they could just win you your Sunday money game or even a club championship.