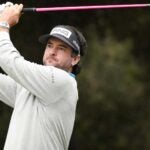 Bubba Watson simple picks and target and lets it rip.

There is nothing worse in golf than standing over the ball and having a million swing thoughts running through your head at once.

Take the club back outside the hands. Don’t get quick at the top. Remember to turn through the ball. Stay balanced to the finish.

By the time you actually get around to swinging the club, all of those thoughts clouding your mind make it extremely difficult to make a confident swing. Overthinking is something that has plagued every golfer from time to time — even the pros.

But the best pre-shot swing thoughts are the simple ones. The thoughts that don’t get you too much inside your head, but instead allow you to make a free and confident swing. That is what every golfer should aspire to.

Bubba Watson is a great example of a player who doesn’t overthink his swing — and you can probably tell by the homegrown nature of his move. There is little technical about his swing, and his pre-shot swing thoughts follow that same ethos.

“For me, it’s about picking a target,” Watson said on a recent episode of the Pat McAfee Show. “The whole thing is the target.”

Simple, but effective for the two-time Masters champion. He just chooses a target and only focuses on how his preferred shot shape — a sweeping banana slice — will end up there.

“I aim it at a tree or a target or a TV tower, whatever it may be, and that’s all I think about,” he said. “Aim at that and cut it. (Those are) my two thoughts … The physical skillset is there. All I’m trying to do is dumb it down.”

He went on to say he is “trying not to think” when standing over the ball. He just wants to pick a target and pull the trigger.

In golf, simple is better. So don’t overthink it.