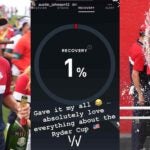 As American players finished their matches and watched their points tally up to a record 19, they started tallying up their drinks, too.

There was Brooks Koepka sipping a Mich Ultra. Xander Schauffele sliding down a hill with a High Noon in hand. Patrick Cantlay watching a teammate’s match with two empty cans in his back pockets.

On Sunday, the extra few hours for some beverages, and some good vibes coming off a win, made for a fantastically entertaining post-win press conference, in which Dustin Johnson played the starring role.

And that was all before the real party even began. Later that night, as we saw in several social media posts, players donned hilarious Bryson-Brooks shirts and Rory McIlroy entered enemy territory to dance and forget his team’s loss.

When you think about it, though, these are elite athletes who usually treat their bodies well; it’s their livelihood. So how much partying could they actually do in one night? Dustin Johnson’s brother/caddie Austin Johnson gave us a pretty good idea when he posted his Whoop recovery score for the day after Team USA’s raucous celebration.

For those of you unfamiliar with how Whoop works, 1 percent is the lowest recovery you can possibly have. It means whatever you did the day before was really bad, or really fun, depending on how you look at it. And one of the biggest factors that can impact your recovery score is alcohol consumption.

According to Whoop’s own data, “of all the behaviors available to record in the Whoop Journal, drinking alcohol is the one with the single greatest negative impact on next-day recovery.”

Even consuming a small of amount of alcohol in a day can negatively affect recovery up to 8 percent. Other factors that contribute to poor recovery, according to Whoop, include lack of sleep and hydration. Both things Austin Johnson, Thomas and the rest of Team USA probably missed out on as they partied the night away.

While it’s not a great idea to get in the habit of of drinking heavily, missing out on sleep and not drinking enough water, you can hardly blame the U.S. for wanting to celebrate their historic 19-9 win over Europe.

As in any competition, to the victor goes the spoils — and the hangovers.