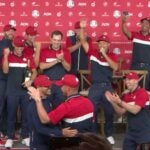 The U.S. Ryder Cup team's post-win press conference was an entertaining one, to say the least.

One of the best parts about these team events, like the Ryder Cup and Presidents Cup, is that players are laid back, at least when the long week is finally over. They are together, they are loose, they are having a little more fun and, hey, maybe a few beverages helps contribute to that.

Either way, the post-Ryder Cup press conferences are always delightful, always entertaining. First, the losing team and captain goes on stage — all 13 of them together — and then the winners have their turn. All 13, often with drinks in hand — heck, Collin Morikawa carried a massive bottle of Champagne. Then, for the most part, typical press conference decorum gets thrown out the window.

“Is this live?” asked one U.S. player as the Americans’ presser finished up, wearing a touch of horror in his voice. Yes, it is. It really is. Here were the best moments following the U.S team’s 19-9 Ryder Cup victory at Whistling Straits on Sunday.

‘I had no idea we had media after all of this’

Xander Schauffele wasn’t ready to start looking ahead or talk about unfinished business when it comes to winning overseas. In fact, he wasn’t ready for media obligations at all.

“I’m sorry to burst your bubble, but we are just going to enjoy now,” he said. “You’re thinking way too far ahead of us — for me, personally. I had no idea we had media after all of this, so we’re going to enjoy this one for now, and collect ourselves shortly after.”

Dustin Johnson, often the MVP of these post-event press conferences (and that was again the case on Sunday), had a big week, finishing 5-0 and was 3-0 when teamed with Morikawa. Johnson and Morikawa were asked about budding “bromances.” The question: “So you remember Molinari and Fleetwood in 2018? Will you go in bed together with the trophy?” [Needed context: “Moliwood” was 4-0 at the Paris Ryder Cup and appeared in a cheeky morning-after video in which they were both in the same bed with the trophy put out by the European Tour.]

“If you want me to, absolutely,” Johnson said, stone-faced. “I ain’t scared.”

Justin Thomas was asked if he was the emotional leader of the team, but Thomas turned the tables and brought in DJ, the oldest player on the squad at age 37, whom Thomas called “grandpa.”

“I think we all as a team vote DJ as our emotional leader,” Thomas said. “Poor guy went out there, tried to get six points, but all he could do was five. [Laughter] He is our leader. We’re following grandpa into the abyss.”

The joke here, to be clear, is that you can’t record more than five points, since there are only five matches. Reading between the lines, since DJ and his caddie/brother Austin are well-known for their sub-par math skills, it sounds like DJ perhaps thought more points were on the table at some point.

Johnson, as mentioned, was the oldest player on the team. But, he was asked, does he still have the stamina to out-party the rest of the crew after a big win like this?

“Absofu-” — he stopped short here from adding an expletive for emphasis and finished — “lutely. Next question.”

“Anything Phil said during this whole competition, I can not repeat,” U.S. captain Steve Sticker said.

Bryson DeChambeau speaks to the media

Bryson DeChambeau was asked what it felt like to win the Ryder Cup, and he thought for a second before asking, “Why did you single me out?”

Jordan Spieth was sitting directly behind him, and interrupted. “Because you haven’t been in media in a long time,” he said. The group roared with laughter, as Spieth was referring to DeChambeau’s recent reluctance to do media interviews. DeChambeau laughed, turned around and high-fived Spieth.

Xander brought a cigar in

That’s it. That’s all I got to say here. He takes after his dad.

‘Can we get off this stage?’

Speaking of Schauffele, toward the end of the press conference, he was ready to go.

“I feel like I’m getting too sober right now,” he said. “Can we get off this stage?”

About a minute later, someone asked if the press conference was live. Yes, it was. On Golf Channel. Schauffele and Patrick Cantlay broke out in laughter.

Bryson and Brooks hug it out

The press conference was over, but Thomas had one last thing to say, referring to a major topic in the golf world over the last few months.

“I think before this is all over we should have Brooks and Bryson hug in the middle of the room,” Thomas said. “To prove how much of a team we are, they are going to hug.”

Thomas started singing Why can’t we be friends as the two walked down in front of the stage. Schauffele held the microphone and put the trophy in the middle of them, taking over as emcee. They hugged, the team cheered, and the press conference was over. Finally.