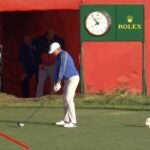 Golf fans are learning a little bit more about *just* how much the first-tee jitters are affecting the Ryder Cup.

It’s not difficult to understand why the first tee at the Ryder Cup is different from anything else in the game of golf. Thousands of screaming fans enclose the space around the tee box, forcing the weight of expectation (and excitement) upon those in the arena.

“I’ve always said if I had to put it on a tee, I don’t think I could have,” Justin Thomas remembers of his first shot at Le Golf National in 2018. “I would have been too nervous, to where I would not have been able to get a ball on the tee.”

“France had just an absolutely absurd setup there on the first tee,” he said. “It was, hands down, the most nervous I’ve ever been. It is just a total out-of-body experience.”

Those jitters are a feeling shared by every single Ryder Cup competitor, even by those who’ve been competing in the event for decades.

“When the alarm goes in the morning,” Ian Poulter said. “You know it’s coming. It’s been building all week.”

“These are the moments that make you know you’re alive,” Padraig Harrington offered.

And when the moment comes?

Said Poulter: “It’s a nervy atmosphere to be in.”

But the question remains: just how nervy is it? For those of us watching from the comfort of our couch, it’s hard to know the full breadth of emotions that join those in the Ryder Cup. Well, until today.

With tracking technology provided by WHOOP, golf fans were able to watch Poulter’s heart rate as he stood on the first tee at Whistling Straits. They watched, in real-time, as he walked to the tee, his HR climbing from double-digits to just shy of 120.

Cameras followed as he looked down and pierced his tee into the earth. The crowd roared. His heart rate spiked to 130.

“These guys have a resting rate in the 50s!” Nick Faldo exclaimed on the broadcast.

Poulter’s HR raised all the way into the 130s before he pulled back the club and struck his tee shot, sending his ball fluttering into the fairway beyond.

The moment lasted all of 30 seconds, but one hopes it won’t be the last we see of WHOOP’s pressure-tracking tech, which is also believed to be worn by Justin Thomas, Rory McIlroy and Tyrrell Hatton. It was a fascinating look into the minds and bodies of golf’s greatest players in the game’s most adrenaline-heavy event.

Cheers to Ryder Cup week, which we now can confirm is, if nothing else, heart-thumping.