Why Mel Reid’s strength is such an advantage at the U.S. Women’s Open 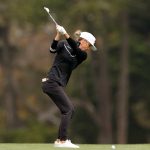 SAN FRANCISCO — As with any U.S. Open setup, the rough at the U.S. Women’s Open at Olympic Club is deep and difficult to escape.

Players have been remarking on the rough all week, and it’s put a premium on landing in the fairway off the tee.

“The rough is definitely up,” Mel Reid told reporters following her first round. “Monday I could barely get a 9-iron 60 yards. I love the rough, personally. That’s how a U.S. Open should be.”

Escaping the rough doesn’t just take skill with a golf club. You also need enough strength to muscle the clubhead through the thick stuff without it getting grabbed and twisted in the process.

That type of brute strength is exactly what Reid works so hard in the gym to build, and it’s that same strength that’s pushed her to the top of the leaderboard.

“I work my a— off in the gym,” Reid said of her fitness routine. “It’s something that I do consistently.”

Reid’s workout routine, which our own Sean Zak tried not too long ago, is pretty intense. She and her trainer of two years, Ken McDonald of Lifetime Performance, are extremely aware of everything they’re doing in the gym and how it translates to her game.

“We’re very switched on about it,” Reid said. “We know what parts of my body are weak, we work on it.”

Lately, she’s been working on getting more speed in her golf swing.

“We’re trying to get a little more speed in the golf swing. We’ve been working ok that the last seven, eight weeks, and it’s been paying off,” Reid said of her training program.

Speed and strength are essential for getting out of the thick rough here at Olympic Club. Many players have struggled to do more than punch their ball back into the fairway after a wayward tee shot. The ability to advance the ball out of the rough will be a huge advantage over the next few days.

With her strength, Reid is able to maintain enough clubhead speed to slice through the rough and make solid contact with the golf ball, giving her far more options if she hits a wayward tee shot than some of her competitors.

Reid credits that strength — and the work ethic that’s helped her get it — with her current position atop the leaderboard.

“I’m not scared of working hard and working out hard.”

If there’s anything you can take away from Reid’s approach to fitness and golf, it’s that there’s no substitute for hard work. If you want to be better, faster and stronger, you’d better be willing to put in the time and effort to get there.

It’s what’s gotten Reid out of the rough and it’s what could get you closer to where you want to be.