Why Mel Reid is adopting a ‘Be like Brooks’ approach at the U.S. Women’s Open 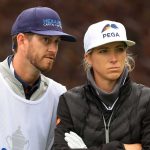 At least part of Mel Reid's approach this week can be attributed to her recent Facetime session with Brooks Koepka.

Brooks Koepka isn’t competing in this week’s major championship, but he somehow seems to be influencing the leaderboard nonetheless.

Mr. Major is likely back in Jupiter, Fla. right now, but his major-championship focus is being embodied by 18-hole leader Mel Reid, who shot a four-under 67 Thursday at the Women’s U.S. Open. After admitting earlier in the week that she’s never felt more prepared for a major, she was asked to explain why Thursday.

“I text Brooks,” Reid said. “I texted Brooks on Tuesday. We had a long conversation and then we FaceTimed for an hour on Tuesday night. He gave me a few things that he follows by in a major, so obviously appreciate his help.”

Koepka and Reid established a strong relationship in the past few years when Reid lived in south Florida. They’d play matches against each other during the offseason. But when Reid says “he gave me a few things that he follows by,” what does that mean, exactly?

To be like Brooks is to do a lot of things. Her five-birdie first round was a lot like Koepka’s major starts. But it obviously goes much deeper than that. Part of Koepka’s routine with majors is to scout the course weeks ahead of time — it’s not totally clear that Reid did this — but also to lock in completely during the week. Only a few people are allowed inside the house he rents that week. His agent, his fiancee, his coach, his chef, his caddie, and perhaps one or two more. That’s it.

Koepka told GOLF.com about his laser-focused approach during the majors back in 2018, when we named him our Player of the Year. “I get in that zone, even if I’m relaxing or whatever, where I just zone out,” Koepka said. “I don’t even hear anybody. You could ask me a question five times and I don’t even hear it. I’m so into what I’m doing in the moment, and golf is my surrounding where I can do that. You put me inside those ropes and I’m focused on getting that ball in the hole as quickly as possible.”

Is that what Reid is getting at? It seems to be. She discussed how her and her caddie, Ryan Desveaux, prepped a bit differently this week, knowing that there will be tough breaks at a U.S. Open setup. Whatever Koepka told her has stuck. She called it “invaluable” Thursday afternoon and a sign of how she’d like things to play out this week. But when she was asked to explain exactly what Koepka told her, she said no way. That’s a secret.

“I’m just trying to be a bit more like Brooks, honestly,” Reid said.

Oh, be a bit more like the two-time U.S. Open champion? Not a bad idea at all.