The 1 surprising warmup mistake costing golfers both distance and accuracy 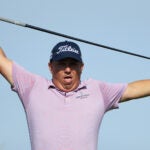 Jason Dufner is great. This stretch? Not so much.

I must admit, I’m not very good at warming up. As in, I’ve never really cared about it all that much about it. I’ve wavered between a few different kinds of warmups when I was playing junior and college golf, but nowadays I’m almost entirely indifferent on it. Hit a few balls before your round? Sure. I’ll hit about 10 of them before I start getting bored because of how pointless it feels. In some ways, I’d almost just prefer taking about 10 swings with a weighted club of some sort and stepping to the first tee.

I’m aware my opinion here is an unpopular one, and probably for good reason, because there’s all kinds of evidence that underlines how important a good warmup is for your game.

If you’re one of those people who thinks warming up is super important, then good for you! I support your decision — as long as you’re warming up in a way that’s actually helping you. The unfortunate truth is there’s one mistake a lot of well-intentioned golfers make: It’s called static stretching.

Static stretching is the kind of which you see above, and it’s pretty simple: It’s when you’re standing (or sitting) still, moving your body slowly into a stretch, and holding it there. There are some benefits to it, mainly that it increases flexibility and range of motion. But when it comes to warming up for golf, there are some big negatives.

A much-cited 2004 study found that static stretching actually makes it harder for athletes to use their body to generate torque and force. This was followed up by a golf-specific study by Professor Jeffrey C. Gergley of Stephen F. Austin State University, who measured the effects of static stretching on 15 male golfers and observed noticeable drops in clubhead speed, distance, accuracy and overall contact. The theoretical cause, put simply, was because static stretching had negative impacts on things like reflexes, which are really important to golf.

Yet static stretching remains one of the most common features in golfers’ warmup routines — THE most common, according to another recent study — which is evidence that golfers aren’t actually using their warmup to get the most out of their games.

So the next time you’re preparing for a round, remember that the purpose of a warmup is supposed to, quite literally, help you warm up. It’s why experts far and away recommend “dynamic” stretching. This is the kind of stretching that involves a lot of movement and exercise. Follow a more dynamic warmup routine, like you see below, then pair that with a range warmup, and you’ll be getting your heart pumping, your blood flowing, and feeling loose and limber for when you do get to the course.