The hilarious reason Bernhard Langer avoids coffee before a round 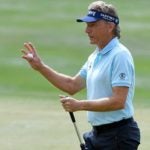 In a recent interview, Langer revealed that he’s starting to enjoy coffee a bit more than he used to, but he “would never drink coffee before a round.”

Despite being in extremely good shape, Langer’s low tolerance for caffeine is the result of a traumatic yet hilarious incident at a Tour stop in Vegas some years ago.

“We were playing Las Vegas on the PGA Tour, and there was a storm delay after nine holes,” Langer said. “This lightning storm came in, and thunder, so we were called off the course and went back to the hotel by the course, and it looked dark out over the course, like it was going to take four or five [hours] to clear, if at all.”

Having been mid-round when the rain delay interrupted, Langher and his caddie were cold and hungry when they arrived at the hotel. So naturally (Langer has a sweet tooth), they ordered two slices of cheesecake and a pot of coffee thinking they had plenty of time before play would resume.

After finishing off his cheesecake and two cups of coffee, Langer got a text saying he had to be back in position on the golf course in 20 minutes. So much for that 4-5 hour rain delay.

“So I went back out and with all the caffeine and sugar I was literally shaking, for about the next 45 minutes to an hour,” Langer explained. “My first shot was a chip with a seven iron, and I shipped it over the green and made a bogey.”

Not the start you want, regardless of rain delay.

And it gets worse.

“I bogeyed the next two holes as well,” Langer revealed. “It was like an out-of-body experience until I calmed down.”

Needless to say Langer doesn’t drink coffee before he plays anymore. And when he does have a cup of joe, it’s decaf.