The Etiquetteist: 6 dos and don’ts for treating your caddie right 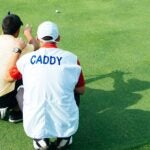 A solid player-caddie relationship makes every round a breeze.

Keep up and shut up. That’s the caddie’s golden rule. (Oh, and don’t touch the sand in a bunker, as we learned at the U.S. Amateur this week.) But what about the other person in the pairing? If you’re playing golf with a looper on your bag, are you beholden to any codes of conduct?

Before he joined the staff at GOLF.com, James Colgan spent many a summer earning his keep as a caddie on Long Island, so he’s got a clear-eyed read on the proper etiquette. Here are his six dos and don’ts for being a good on-course boss.

Caddies carry cargo. But they’re not pack mules. They’re people. And while you’re not required to get to know their hopes and dreams, the least you can do is learn your looper’s name. Just the first name will do. James. Jack. Jill. John. See? It isn’t hard. But, Colgan says, it is a simple, welcome signal of respect.

Lay off the first-tee lectures

Different players have different preferences. Maybe you’d rather not get chatty with your caddie. Perhaps you don’t want yardages, or help reading the greens. No need to apologize. But also no need to browbeat your caddie with all of your requirements before you’ve even started. A good looper will be paying close attention as you play. “And they should be able to pick up in the first few holes what your tendencies are and what your likes and dislikes are,” Colgan says. So give your looper the benefit of the doubt. If a few holes pass and your caddie seems oblivious to your leanings, that’s when you can make your leanings plain.

If you don’t like the service your caddie has provided, you could, of course, report them to the caddiemaster, or punish them with a stingy tip. But that’s passive-aggressive and unproductive. “Caddies can very much get buried in the caddie yard if the caddiemaster finds out about a bad job,” Colgan says. And then what do you have? A disgruntled caddie who hasn’t learned a thing. Your better recourse, Colgan says, is straightforward conversation on the course. It doesn’t need to be a scorched-earth takedown. Simply tell your caddie, politely, what’s not working out, and why. Most loopers will make adjustments on the spot. Feedback of this kind is especially valuable for beginners, whose best path to improvement comes on the job. Sure, there are exceptions. If you have a caddie who does something egregious (shows up stinking drunk, say, or ridicules your swing throughout the round), you’re within your rights to report the conduct. But try to make that your last resort.

Feel free to pitch in

Not all caddies like it when you rake a bunker or repair a pitch mark for them. They worry that they’ll be seen as slacking. In most cases, though, Colgan says, a hard-working caddie will welcome the assistance. “Anytime someone was willing to step into a bunker and say, ‘Don’t worry, I’ve got this, you can go ahead,’ or grab the flag while I’m in the bunker raking, it was hugely appreciated,” Colgan says. “It’s sort of an acknowledgement. ‘I see you’re working hard. I see you’re doing stuff.’” None of this is mandatory, of course. You’re merely helping out to keep things moving, which benefits the entire group.

Let’s be clear: your caddie’s read was perfect. You just pushed the putt. Same goes for that 7-iron on the last hole. You had the right club. You simply chunked the shot. Blaming your caddie for your own failings is as old as golf itself (Colgan once caddied for a guy who berated him after his shot hit the flagstick and bounced into the water), but it hasn’t gotten any more honorable over time.

This just in: caddies are out there to make a living. It’s your job to know their going wage. A good way to get this intel, Colgan says, is to ask club members or the caddiemaster. But there’s also nothing wrong with putting the question to your caddie (“Hey, what do you usually get?”). Just be forewarned, Colgan says. Some caddies, being the lovable scoundrels that they are, might tell you a slightly inflated rate.