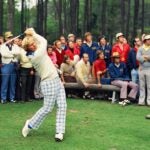 What can we learn from the best power players in Masters history?

With the 2021 Masters fast approaching, I thought it’d be fun to delve into the archive and take a look at some of the best players in Masters history. Specifically, the areas of those players’ games which were especially good, so we can figure out what to learn from each. I’ll be making these into a little Play Smart mini-series from now until the Masters, with each column focusing on a different element of the game. Today, we’re starting with the headline-grabber: the best power players by era.

A quick note before we begin: I didn’t dive into the stats to generate the list below. It’s organized by identifying one Masters champ per decade who I think we can all learn something from, so don’t get hung up on the details of who was included and who wasn’t. Rest assured, it’s fully subjective (so if you have a problem, tweet it at me!).

I was tempted to go with Horton Smith here, but instead opted for Byron Nelson, who won one fewer green jacket in the 30s but caught up with his win in 1942. A superb driver of the ball both in distance and accuracy, Nelson only finished outside the top 10 at Augusta National once between 1935 and 1942 (a paltry T-13 in 1936), and in his 1946 book Winning Golf, he explained his swing feeling coming into impact for maximum power off the tee.

“I have the sensation of my right hand trying to catch up with my left,” he wrote. “The only way you can get maximum clubhead speed is through unleashing the full power of the hands as your club enters the “hitting area” — the last 20 inches before clubhead impact with the ball.”

Jimmy Demaret’s golf swing is remarkably pure, and while golf fans today may recognize his name from the history books, his accomplishments as one of the best Masters players in history seems to get overlooked. Three wins and three more top 10s in the eight tournaments from 1940 to 1950, his advice on how to improve off the tee was simple: Practice the clubs that matter, more, as Demaret once said, “If I had to do it all over again, I’d hit more drivers and more wedges.”

It doesn’t quite feel right not to include Ben Hogan on this list, but Sam Snead dominated the Masters throughout the 50s with two wins and three more top-four finishes. As I wrote last month, Snead said throughout his life that the grip was the most important part of the golf swing, in large part because of how it related to what he once said was the “secret” to power: the feeling of pushing the club away with your left arm on the backswing, and then pulling down — hard — to start the downswing,

Jack could’ve have been the pick here and in the 70s, but we’re going with Arnie so they could both get their due. The four-time Masters champ used to be a GOLF Magazine contributor and gave countless tips throughout his life, which Golf Digest did a nice job of rounding up right here. Palmer endorsed a shallower golf swing, a ball position off his left heel, and a stronger left-hand grip. He also shares his simple advice for all golfers: Don’t fall into a trap of trying to swing “easy.”

“Many golfers discover they can hit the ball squarely more frequently if they don’t swing hard,” he said. “So they lose the will to be aggressive. The problem is that swinging easy becomes a difficult habit to break. As soon as the soft hitters try to add some more power, they begin to miss shots. I think that almost any golfer can learn to hit the ball hard and squarely.”

Probably the best power player in golf history — though his game was so much more than that — it’s hard to truly captured how intensely Nicklaus dominated the Masters during the 1970s. Two wins, two seconds, two thirds, two fourths and two more top 10s, he was the surest bet their was. He had three keys to his power.

The big-hitting Ballesteros was both wild and artful off the tee. It’s a formula that works at Augusta National during any era, but Seve used it to full effect during the 1980s, winning twice and finishing runner-up twice more. Though he wasn’t known for his accuracy, his advice was to embrace your creativity everywhere from tee to green, which will allow you to see opportunities to recover more clearly.

“The imaginative player sees several ways to recover from a situation,” he said, “while the mechanical player sees only one.”

Fred Couples’ smooth golf swing looked great swaggering around the top of the Masters leaderboard, with a win, a runner-up and three other top 10s between 1990 and 1998. He kept it pretty simple with his technique, but “Boom Boom” never lacked for distance because of it. His advice? Focus on the shoulders, not the hips.

“I grip it strong, and I’m just focusing on making a big turn with my shoulders,” he said. “I’m not as worried about what happens with [my hips].”

Tiger’s astonishing Masters record speaks for itself, and there’s an overwhelming number of tips from him out there it’s hard to know what, exactly, to do with him in this spot. That’s why I always go back to Tiger’s now-legendary interview alongside Butch Harmon on Golf Channel Academy. Tiger said he tries “to feel like my arms beat my body” on the downswing, which is a feeling he uses to counteract the speed trap that junior golfers fall into.

“I was a product of junior golf, where the hips would go, get the club to the inside so they can flip it,” he said. “Yeah, you hit the ball a long way, but it can be hard to control. It’s hard to hit the ball the same distance with a good shot shape.”

Bubba Watson’s prodigious length has propelled him to two green jackets, but when it comes to his golf swing, he keeps things extremely straightforward.

“I don’t try to change my swing. I know it changes, but I’m not trying to. It’s just one of those natural things,” he once told me.

As for what you can learn? Notice Bubba’s internal hip rotation. As teacher Lucas Wald notes, there’s not a lot of side-to-side shift in Bubba’s swing; he loads deep into his trail hip on the backswing, then rotates deep into his lead hip on the downswing.