What’s the deal with Patrick Reed’s eye-catching helicopter finish (and should you use it?) 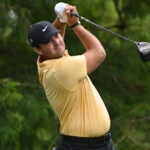 You’ve probably seen it before. It’s hard not to — it certainly catches the eye.

That move is, of course, the helicopter finish, and you’re forgiven for not understanding what exactly the point of it is.

Arnold Palmer was the king of the helicopter finish.

Tiger Woods does it too, usually, when he’s trying to hit a miracle shot, like the one below.

Patrick Reed’s become a bit of a master of the move, too. You may remember Reed using it early and often en-route to his green jacket victory in 2018, and it was there once again during his second round at the 2020 U.S. Open.

So, what’s the deal with the helicopter finish? It’s not a style-choice — that’s an added bonus — but instead, it’s more of an over-exaggerated swing feeling. As Reed explains in this handy Golfing World segment: He usually likes to draw the golf ball. That’s his stock shot. He releases fully with his hands and more often than not poses for a full, well-balanced finish at the end of it.

But there are times when he needs to hit a fade, and that’s when the helicopter finish comes out. Just as Arnie used it to prevent a hook, Reed does it to make sure he never lets the clubface close, and therefore won’t miss left. He may over-fade it, or pull it slightly, but as you can see, he’s holding onto that clubface so it stays open until the very end, no matter what.

So, should you use it? If you’re a skilled player who’s struggling to hit fades, give it a try. It also might be helpful for those who are struggling hitting duck hooks and don’t know how to solve it. The immediate solution is to go get a lesson, of course, but ultimately, the helicopter finish is Patrick Reed’s way of controlling the clubface. So far, it seems to be working.