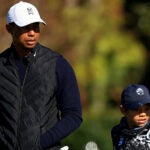 Tiger Woods and son Charlie Woods during Friday's pro-am at the PNC Championship.

The 11-year-old boy stands over an 8-foot putt. The 85-year-old man stands about 4 feet in front of him. Gary Player is coaching.

The boy doesn’t. He putts, and the ball slides by the left side of the hole, but he didn’t look up until the end. Charlie Woods is listening.

Woods and Player are among the 40 players sharing the stage this weekend at the PNC Championship, a pro golfer-family member event. And for a few minutes on the practice green at the Ritz-Carlton Golf Club in Orlando, Player, the nine-time-major-championship winner who is playing with his grandson, was sharing with Woods, who is playing with his dad, Tiger, the 15-time major winner.

In the video shared by the OnCore Golf Twitter account, Charlie Woods walked to his ball after his putt, and he tapped it in with the back of his putter. As he bent down to pick his ball out of the hole, Player continued to coach. And Woods continued to listen.

“See if you move your head, look what happens,” Player said. “See the putter. Move your head where the putter goes …” He exaggerated a twisting movement with his putter as he moved his head.

“You shouldn’t even see a putt this long go in the hole,” Player continued. “You’re going to listen. Are your ears good?”

“Yup,” Woods said. As Player was talking, Woods had taken a few steps back and began to line up a 6-foot putt on another side of the hole. Player put his putter in front of Woods for emphasis.

By this point, Tiger had made his way over. He was holding what appeared to be a cup of coffee in his right hand, and a putter a wedge in his left. Charlie putted again.

He didn’t look up until the end.