Daniel Berger’s climb back up the Official World Golf Ranking is due to his short game improvement.

Daniel Berger is the epitome of the modern professional. He’s an athlete who would look just as comfortable on a basketball court as he does on the golf course. But as valuable as raw athleticism is, it’s not enough to survive on the PGA Tour. Berger’s emergence into the top 15 of the Official World Golf Ranking is in large part due to his improvement around the greens. His deft short-game touch complements his power from the tee and fairway.

Up your sand save game from Berger’s own progression by following the five steps here.

Tracking the ball with your eyes as Berger is doing here makes it easier to continually rotate your body while maintaining your shoulder tilt. Look at the players at the top of the OWGR when you watch TV — most never “see” impact on shots around the green (Dustin Johnson included). Freeing up your eyes allows your body, arms and hands to work together through the strike.

The easiest way to learn the basics of bunker play is to picture the ball flying out of the sand it’s sitting on. Splashing the sand out of the bunker guarantees that the ball flies out as well. The faster and farther the sand flies, the farther the ball will go. It’s that simple. 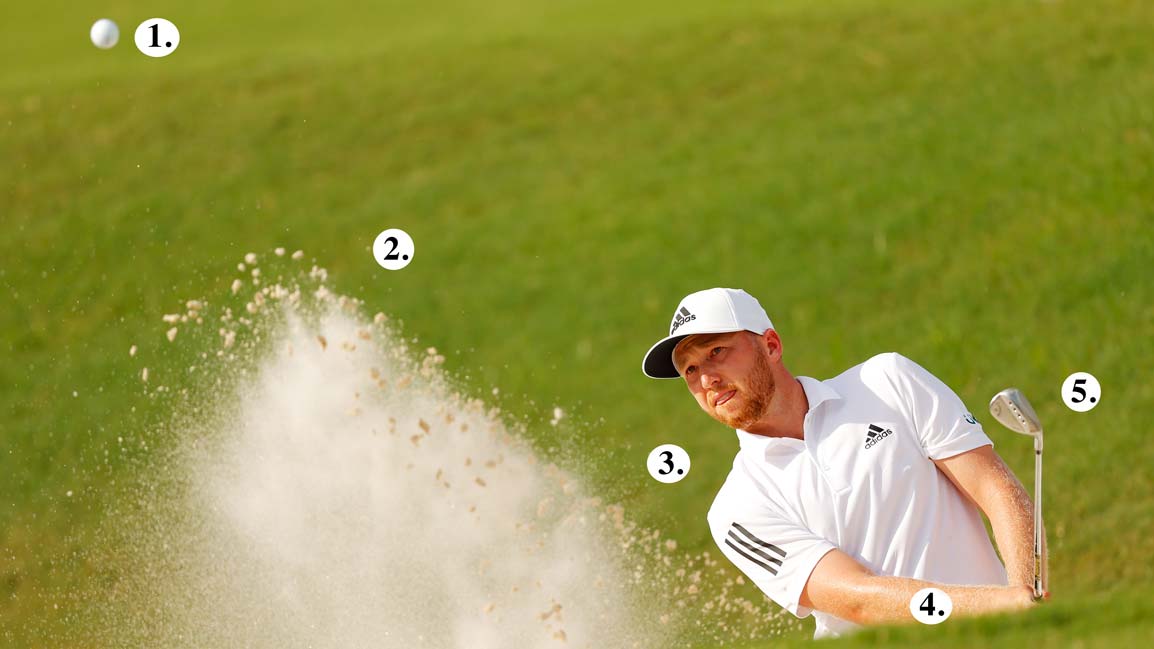 Maintaining your shoulder tilt helps ensure a consistent entry point (where the club enters the sand) while allowing your wedge’s bounce to help the club “skip” through the surface without digging. If your tilt changes, it’s almost impossible to hit consistent sand shots.

Extension is overrated in the sand. Keeping your hands close to your body (near the left hip) at the finish helps you properly “throw” the clubhead through impact. This creates more speed, which produces more loft and spin. “Reaching out” with your arms is a no-no.

All great bunker players release the club at impact, just not the way you may think. Notice how Berger’s lead wrist is bent backward but the face continues to point toward the sky. This keeps the bounce of the club working through the sand while maintaining the loft needed to get over the lip.

Brady Riggs is the director of instruction at the Four Seasons Resort in Hualalai, Hawaii.