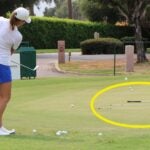 Jennifer Kupcho performing her chipping drill on the practice green at Mission Hills.

To shoot lower scores, it’s crucial to improve your short game. You can turn disaster holes into pars simply by chipping the ball closer to the hole and having better distance control on long putts.

For professionals, short game performance is especially important during major championships, such as the 2020 ANA Inspiration this week. The Mission Hills rough is thick and the course is difficult, so saving strokes on and around the greens is imperative.

LPGA players Jennifer Kupcho and Stephanie Meadow used a few simple drills to hone their short games ahead of competition this week. The good thing about these drills is that they’re free – you probably already have all the tools you need – and they’re effective.

During practice days at the ANA Inspiration, I caught up with Kupcho and Meadow to hear more about their short game drills and why they work. Try these during your next short game practice session to help shave strokes off your scores. If they work for the pros, they’ll probably work for you, too.

To set the drill up, place a rod 1 yard behind the hole. Place another rod 7 yards apart from the first rod. Then, place five tees on the ground, each 1-yard apart from each other (as illustrated below by the yellow circles).

To perform the drill, hit five chip shots from each tee location. The goal is to land the golf ball over the rod closest to the player, and get the ball to stop before reaching the farthest rod/club. Then, just keep track of how many successful attempts you make out of 20.

For a greater challenge, try out wedges with different lofts. Meadow says she performs the drill with a 58-degree lob wedge and a 54-degree sand wedge. Since the 54-degree wedge has less loft, this makes the drill a bit more difficult.

“It teaches you creativity,” Meadow says. “With the 54-degree you have to start really thinking about what you’re doing. Obviously I’d never really use a 54-degree for that shot, but then I go back to the 58 and it’s so much easier. I think it’s really helpful. It’s also helpful to randomize the shots instead of going backwards from tee to tee. I do it every week and I’ve been doing it every week now and I really like it.”

According to Meadow, PGA Tour player Richy Werenski also uses the drill; she says he uses a 52-degree wedge with the rods/clubs placed only 5 yards apart instead of 7 yards apart in order to narrow the landing window. Impressive.

What is Meadow’s key to success in the drill? Tempo. She even starts out the drill by using a metronome.

“I’ve really been working on my tempo, especially with the 54,” Meadow says. “You have to really use soft hands and a slower tempo. We normally start out using a metronome for the first five minutes, just so I get that tempo in my head. If you get quick on a 54-degree – that’s my tendency – when hitting soft shots, you’re never going to be able to do it. The key is to use your intuition of how you’re going to get the ball to do what you want and not over complicate it too much.”

Similar to Meadow’s 7-yards-apart drill, Kupcho’s chipping and putting drills both only require a few alignment rods or golf clubs.

To set up her chipping drill, Kupcho places 3 rods/clubs on the chipping green in 1-yard increments. The purpose of the drill is to focus on a landing spot rather than the result of the shot.

“I started using this drill the past couple weeks because with chipping it seems like I need to just focus on where I land it instead of the final result,” Kupcho says.

To perform the drill, pick a gap in the rods/clubs and try to land the ball within that window. Alternate landing spots from the same chipping location, and then switch up chipping locations for a different challenge.

Kupcho’s putting drill is even easier. Simply place one alignment rod or golf club 1-yard behind a practice hole on the green. Then, from different distances, try to have the ball roll past the hole but stop short of the rod/club. Count how many in a row you can get to stop within that window (obviously, a putt that goes into the hole counts).

This putting drill will quickly expose flaws in your distance control, and the more you perform the drill, the better your pace will get on the greens. If you can do this drill successfully more often, you will learn how to reduce the amount of three putts you have during a round. Avoiding longer second putts will also relieve a bunch of stress. Making things easier on yourself is always helpful, especially when trying to win the ANA Inspiration at Mission Hills.

What are Kupcho’s keys to honing distance control on the greens and getting better at the drill?

Well, it’s time for us to get practicing then.

Explore the latest women’s apparel in our Pro Shop 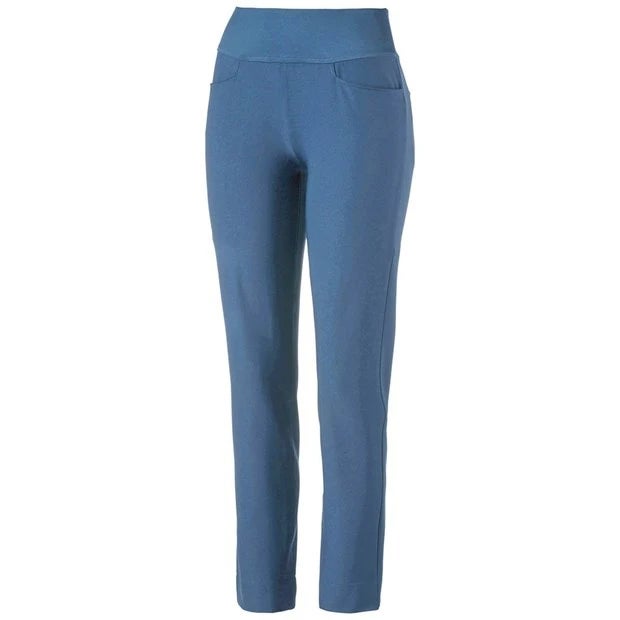