Follow these 4 steps to flush it from fairway bunkers 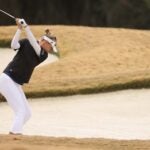 These four tips will have you hitting from the fairway bunkers like a pro.

On Whistling Straits‘ dramatic finishing hole at the 2010 PGA Championship (and the host site of next year’s rescheduled Ryder Cup), Dustin Johnson’s chances at a major were undone by fairway bunker confusion. He hit a great shot from the bunker but didn’t know the rules, earning a two-shot penalty that cost him the title. Let’s review the best way to approach a fairway bunker and stay penalty-free.

The USGA changed its rules to allow players to touch or move loose impediments in a bunker, so you don’t have to worry about that. Unlike in a waste bunker, where just about anything goes, you still can’t ground your club in a fairway bunker or “test” the sand before you hit.

2. Assess your lie and stance

To hit a successful full shot out of the fairway bunker, you need to pass a checklist: Can you clear the lip? Can you make clean contact? Can you take a stable stance? If the answer is yes, full steam ahead.

There’s no shame in hacking one out of these rugged bunkers back to safety, especially if you answered no to any of the preceding questions. Unless you have a good chance at hitting the green, getting back to safety is just the ticket.

Need to make something happen on your last hole of the day? Send it at the green! For crisp contact, choke up an inch, keep your lower body stable and make clean contact. Remember — you don’t need to “lift” the ball out of the bunker; the club’s loft will do that on its own. All you need to do is think about your upcoming birdie putt.