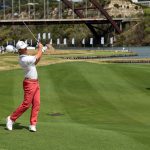 If you were glued to the TV last weekend watching the WGC-Dell Technologies Match Play, you likely watched a fair amount of golf from eventual winner Billy Horschel. And if you were paying close attention, you likely got a glimpse of the unique pre-shot swing rehearsal he was using.

Before he addressed the ball, Horschel would make several practice swings with an extremely closed stance (front foot in front of the trail foot). This unique routine might have come across as goofy, but it serves a distinct purpose.

As NBC reported during one of Horschel’s weekend matches, the closed-stance pre-shot routine gives him the feeling of not opening up his lead side too quickly. Horschel can oftentimes get a tad quick when making his move into impact, and this “closed” feeling helps him maintain the proper sequencing between his arms and body.

Inbee Park has been one of the most successful golfers on the LPGA Tour for the last decade, and if you have ever seen her swing, you’ll know why. Her move is even aspirational for other professionals (Adam Scott watches her swing when he struggles with his tempo) as she’s crafted one of the best swings in the game. But even with seven majors and upward of 30 wins on her resume, Park says she only recently has come to “own” her swing.

“Since I started working with my husband, I found a lot of things that needed to be fixed,” Park said after her dominant victory at last week’s Kia Classic. “I definitely feel like I own my swing now and I know my swing and I know how to fix the problems when I don’t hit it as well.”

If she can continue to own her swing heading into this week’s ANA Inspiration, she may soon add major No. 8 to her resume.

It was revealed last week that Rory McIlroy is now working with renowned swing coach Pete Cowen, and in his first appearance since the change, we saw him practicing with a unique one-handed chipping method.

In a video posted by the PGA Tour, McIlroy can be seen hitting pitch shots with only his trail (right) hand on the club. The technique might look odd, but there is definitive methodology behind the move.

The drill helps McIlroy feel the proper sequencing between his arms and body as he turns through the ball during shorter shots. It can be easy to get out of sequence on these shots, which forces you to save the shot with your arms or hands. By using this drill, McIlroy is better able to understand the connection between his arms and body, allowing him to hit more consistent pitches.

For more help with your game, get a fitting from the experts at our sister company, True Spec Golf.

Swing Stories: A wicked slice wrecked this 7-handicap’s game. This fix saved him