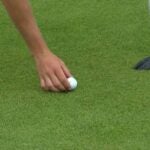 During the Payne’s Valley Cup last week, the camera panned close to Justin Thomas as he teed up his ball. Except, he didn’t use a tee at all. He used his club to kick-up a tuft of turf, placed his ball delicately on top of it, and hit his shot.

That is called a “turf tee”, as it’s known in the biz. LPGA Tour legend Laura Davies liked them so much she used to use them with her driver, and JT using one front and center last week warranted a little explainer for those who may be turf-tee curious.

As you know, golfers are allowed to tee up their ball once per hole, regardless of whether it’s a par-3, four or five. Golfers used to carry packets of sand from tee-to-tee that they’d use to build little mounds that would act as tees. In 1899 Dr. George Grant created the wooden tee, which has been used pretty much ever since.

When to use a wooden tee

The reason why golf balls are teed-up is relatively simple: It helps you hit the ball higher on the clubface, which helps send the ball high and with less backspin.

The process of teeing-up the ball also brings the ball closer to you a slight-but-not-insignificant amount. That changes the axis on which you swing the golf club — it makes it shallower — which is a fancy way of saying it naturally helps you hit up on the ball.

Using a tee is obviously the status quo for drivers, where the goal is to hit the ball as far as possible, and the clubfaces are so deep that it’d be impossible to hit up on the ball without a tee. But what about your other clubs? Are there times when you shouldn’t use a wooden tee?

When to consider a “turf tee”

In simplest terms, using a tee generally helps you hit it higher and longer (it also makes the ball easier to hit for many new golfers, who may struggle to hit down and through the ball, but let’s leave that aside for a moment).

Why wouldn’t you want to hit the ball longer and higher at any opportunity? Simple, really: Because with iron shots, distance and height isn’t always the goal.

Sometimes you need to hit the fairway, so you’ll opt for a lower shot (like Tiger’s stinger) that flies shorter but straighter — and importantly, under the wind.

Or maybe you’re sizing up a shot on a 150-yard par-3 that requires little more than a mid- to short-iron. Most golfers have the ability to get their 8-irons into the air with no problems, and if that same golfer knows their normal 8-iron flies about about 150 yards, why would they risk teeing up the ball, having it fly potentially 160 yards and higher, which means the wind may affect it more?

That’s why using a turf tee may come in handy. By giving the grass a little tap and placing your ball just on top of it, you’re basically giving yourself a perfect lie without all the added variables of using a higher tee.

That’s why I don’t bother with tees most of the time on short par-3s, because I feel like I have a better handle on my distances without a tee than with one. Give it a try yourself, and figure out how and when to use a tee that helps you the most.