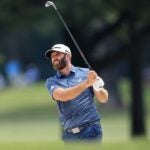 Dustin Johnson has always been a great player, but thanks to some advice from Butch Harmon, he's become one of the top players in the world.

Dustin Johnson is indisputably one of the greatest players of his generation. Since debuting on the PGA Tour in 2008, he’s registered a win in every season he’s played. And over the past five years, he’s become one of the most feared golfers on the planet.

Much of that success can be owed to a renewed focus on his wedge play. In the age of Trackman, few players have used the technology to dial in their games like Johnson has. Before every round, you can find him on the range working on his wedges, making sure he knows exactly how far they will fly on any given day.

A dedicated approach to playing the fade off the tee has also keyed his success. But he also owes much of his success to some practical advice from GOLF Hall of Fame Teacher Butch Harmon. Specifically, Harmon’s advice on Johnson’s extremely bowed wrists.

“The first time I went to work with Butchie in Vegas he told me, ‘We can change that, but no one is ever going to know who you are any more,’” Johnson told GOLF.com. “He said, ‘Instead, we’re just going to make it a little bit better.’”

That decision to keep the unique flair in Johnson’s swing paid off. While the extremely bowed position of Johnson’s wrists is unlike nearly anyone else in the game, Harmon knew that changing it would rid his pupil of comfort in his swing. Instead, they took Johnson’s swing as it was and improved upon it.

“That’s me and that’s how I play golf,” Johnson said. “We weren’t gonna change the way I play golf, we were just gonna make it a little bit better.”

There’s no such thing as a perfect golf swing, and sometimes it’s more beneficial to work with what you have than try an entire rehaul.