How to safely train for more clubhead speed, according to Bryson DeChambeau

Listen to your body, and you can train for more speed with less risk.

JERSEY CITY, N.J. — We all know the story by now. At the end of 2019, Bryson DeChambeau took a good, hard, honest look at his game — and he wasn’t happy. While others in his age group were bagging majors, Bryson’s best finish in a major as a professional was T25. The missing link he settled on was distance. He needed to get bigger, stronger and faster — to become the “casino.”

In less than a year, he bulked up, increased his average ball speed from 175 mph to 190 mph, finished T4 in his next major and won the U.S. Open. He picked up two more victories along the way. He became one of the best and most well-known players in the sport, and brought the issue of distance in golf into the forefront of the conversation.

He sat down with GOLF Top 100 Teacher Claude Harmon to go deep on a bunch of stuff — including his quest for more distance — in this week’s Off Course Podcast, which you can listen to on Spotify below (or subscribe to on iTunes right here).

At Liberty National this week ahead of The Northern Trust, I caught up with Bryson to learn more about distance — and, specifically, how he can get more of it. DeChambeau’s ball speed is currently hovering around 190 mph, but he’s actually in the midst of another big speed push: His goal for 2021 is to average 200 mph ball speed in competition. He regularly reaches those speeds in his practices sessions — and has clocked 199.55 mph on Tour this season — but he wants to be cruising at those speeds more regularly on the PGA Tour.

“I’m really just trying to get my body as strong as I can,” he says. “Really the biggest advantage of that is that it gives me more options. I can hit more irons off tees, or hit less club into greens.”

The rest of us may not be training for 200 mph ball speeds, but more speed is always the goal. How can we get it? Bryson has a few pieces of advice for that, too.

1. Train for specific amounts of time

When you’re trying to increase your clubhead speed, the best approach is to structure your training around specific “sessions,” Bryson says. Your overall speed won’t increase if your approach is to swing out of your shoes here and there. They’re more like workouts, designed to push you through barriers. Bryson does these sessions once or twice a day during non-tournament weeks, but for the rest of us, he suggests a less-strenuous program.

“Take two days out of the week, and on those days for an hour swing with as much effort as you can,” he says. “Hit balls rapid fire, as fast as you can. It’s about breaking both neurological and physical barriers.”

And when you’re hitting balls rapid-fire, you have one goal: Swing faster. To do that, you need to use everything you’ve got at your disposal — and that’s OK, Bryson says. It’s all part of the process.

“You should be constantly trying to apply force in different ways,” he says. “Swing bigger, swing longer, use that momentum. Anything that you can to move faster.”

3. Don’t worry about the golf ball

Oh yeah, and all this means you will hit the ball all over the place. That’s to be expected, and don’t fret about it, Bryson says. Now is not the time to worry about accuracy.

“You’re going to hit the ball everywhere, but that’s OK,” he says. “You’re learning how to get faster. … Once your brain and your body knows it can hit those higher speeds, you can normalize back down to a higher level than you were.” 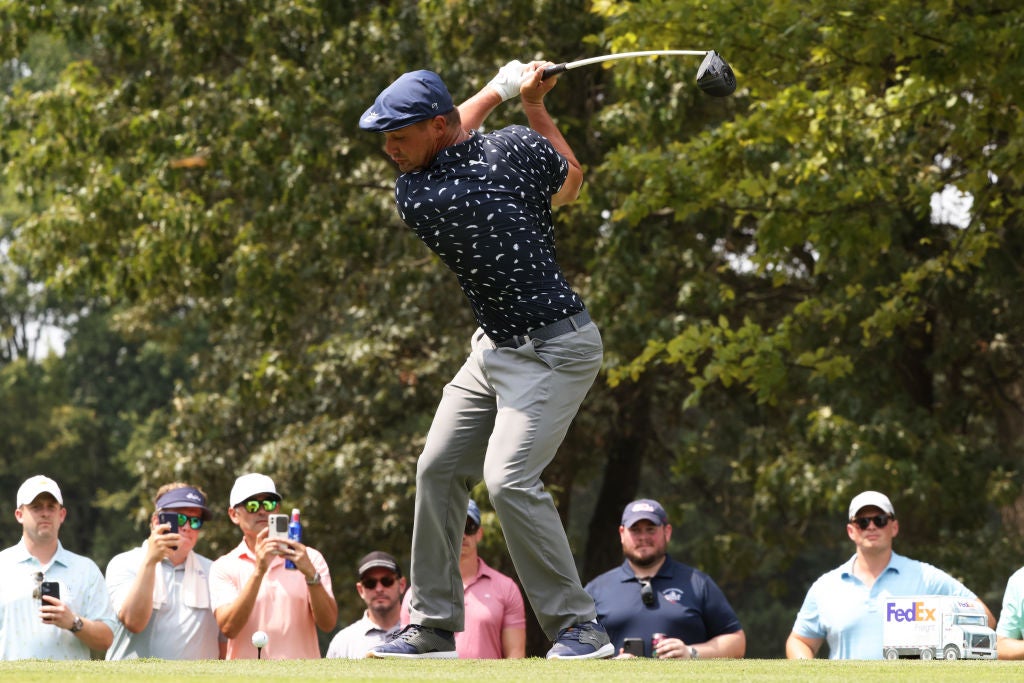 “Recovery is key,” DeChambeau says. “Those 48 hours after speed training where you just do nothing is so important. Giving your muscles time to recover and your nervous system to rest is so important, and not something I thought about when I started [speed training].”

5. Be proactive with tweaks

But giving your body downtime to recover doesn’t mean letting aches and pains set in, Bryson says. That’s one thing he’s adamant about: When you feel stiffness, discomfort or pain, address it immediately. A small tweak can turn into a big problem if you leave it unaddressed.

“If you’re feeling stiffness or soreness, I go straight into the gym and work it out,” he said. “It could mean taking a bath, or stretching it, or doing some little exercise to keep the blood flowing. Anything that prevents the pain from settling in longer term.”

Want more speed? Get a driver fitting from the experts at our affiliate company True Spec Golf.

Is your swing in — or out — of sync? This smart new tech will tell you