‘I’m going to become massive’: Why a bulked-up Bryson DeChambeau wants to get much, much bigger

NASSAU, Bahamas — Bryson DeChambeau is the same height as Tiger Woods, but as the two stood on the Albany driving range Monday afternoon, there was no question who was larger. Woods is famous for his love of working out, but these days he’s dwarfed by DeChambeau, who has directed the full force of his obsessive nature towards the gym. This is Bryson’s Bulking Season, and it’s starting to show.

It’s not clear if that’s a number aided by wind or exuberance, but what is clear is just how wholly DeChambeau believes in his new training regimen. He says he’s been averaging a trip-and-a-half to the gym per day, at least an hour per session, and that he’s seeing results. His primary focus, he says, is core. “A lot of core.”

DeChambeau is playing a home game at this week’s Hero World Challenge at Albany Golf Club in the Bahamas, where he spends parts of his offseason. That means a home gym, too before next week’s trip to Melbourne for the Presidents Cup. 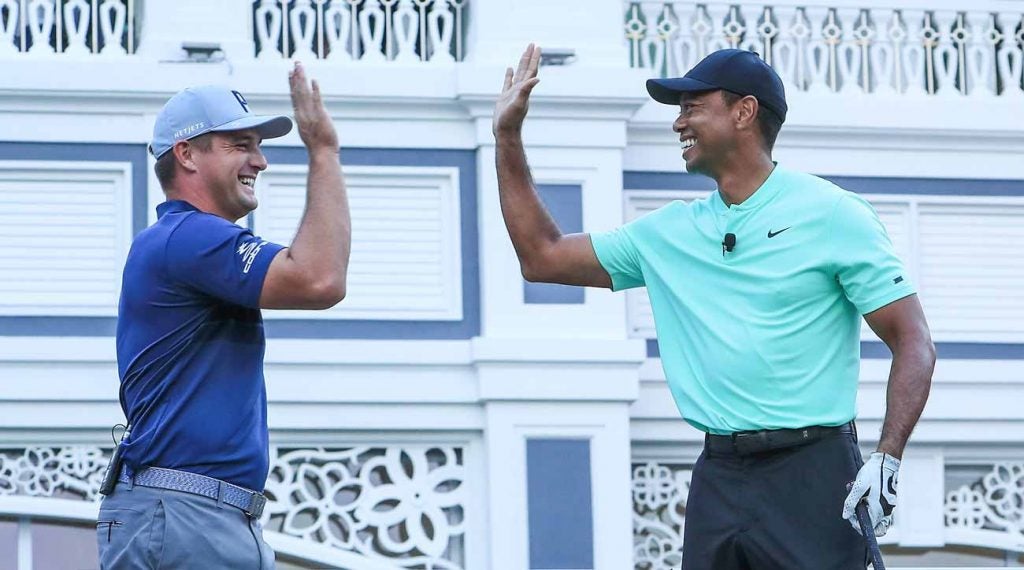 Some modern pros, including Woods, have caught flak for working out too hard and wearing down their bodies. For DeChambeau, the philosophy is the exact opposite: His gym inspiration is to stave off a nagging back injury. That injury — which DeChambeau says stems from a childhood trampoline accident plus the wear of hitting nearly infinite range balls — left him in major pain last season. “Sleeping hurt, everything hurt,” he said. “But it’s pretty cool what you can do to the body by working out. Most people say, ‘okay, I just have to sit down and rest, I’ve gotta take time off,’ but I’ve tried that route and I’ve realized that actually makes you worse.”

DeChambeau has been working with Muscle Activation Technique (MAT) pioneer Greg Roskopf, both in Denver and from home, and it’s clear the doctor’s advice has had a strong effect.

“I was literally thinking I’d need surgery but I talked to Greg, he was like no, no, no, don’t do any of that, we’re going to teach your body to tolerate the force. Usually when ligaments get torn or bones get broken or whatever it’s because the muscles aren’t functioning properly, so thats what I’ve been doing.” He’s been focusing on exercises that get him into “extreme positions of rotations and flexions” at which point he adds weight to build mental and physical tolerance in those positions.

What this looks like to the naked eye is a DeChambeau who is visibly larger than he was two months ago, when he first teased the idea of a bigger, stronger self. He was under 200 pounds then — now he’s 222. “I’m going to become like a gymnast. I watch online, on Instagram, these gymnast influencers, and that’s where I want to get.” It’s a step in the right direction, but 222 is not nearly big enough. DeChambeau has a Hulk-like vision for his future.

“I’ll never get to my target size or weight,” he says. “I think now, with this knowledge and understanding, the sky is the limit. I’m going to become massive.

“You’ll start to see this week.”

The Tao of Brooks: 7 lessons we can learn from Mr. U.S. Open
Go to mobile version