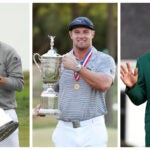 2020 has been a tumultuous year, and it was just as crazy on the PGA TOUR. Multiple tournaments canceled, and three Major Championships in the Fall portion of the wraparound schedule, including The Masters in November. My head is still spinning .

I am (finally) enjoying a little downtime at home and reflecting on the recent season on the PGA TOUR.

Reliving the countless events we covered it is again impressed upon me how good the PGA TOUR players are.  There are a number of incredible shots that stand out; shots that, as an announcer, I got to witness firsthand and describe on the air.

The teacher in me also saw a number of lessons that the club golfer can learn from the game’s best.  (I am putting together an “On the Mark” podcast highlighting those.)

Getting back to the whirlwind three Majors in short succession, I thought I would share lessons that you can learn from those three memorable events.

Collin Morikawa was one of the shining stars in the PGA TOUR’s return to competition. Two wins (including a major) and a Runner-Up would make for a decent career for many, but the young Californian achieved that in a few months.

Many will remember The PGA and point to Morikawa’s tee-shot to the 16th green in the final round — a shot I got to see with first-hand — but what I admired the most was his mature approach to development and progress.

Alongside his coach, Rick Sessinghaus, Collin is very disciplined about his approach to his game.  He works hard on taking ownership of everything he does, and any recommendation his coach makes undergoes a period of self-discovery where Collin works on it, tests it, understands and implements the change.  In short his coach recommends a change and Collin searches it thoroughly as he works on it. This, in my opinion, is why his method is so reliable under pressure.

Collin also focuses implicitly on his tendencies and continually reinforces fundamentals that work — indeed that was his focus at The PGA.  Learn from Collin and check your fundamentals periodically.

The Lesson: Make changes to your golf swing slowly but thoroughly, and never forget the things that work for you.

Much was made about how Bryson DeChambeau bludgeoned his was to success around Winged Foot.  His incredible power aside, I was impressed (throughout the summer) at his accuracy at those elevated swing speeds.

For various reasons most golfers will never be able to garner those incredible increases in speed, but everyone can learn from Bryson’s desire, goal-setting, sacrifice and singular focus.  He set a goal, tuned out the naysayers, worked harder than arguably everybody, and was rewarded with the grandest of prizes.  There is a lesson in that.

What you can also learn is DeChambeau’s approach to distance control with his irons. He essentially has a “clock system” for his backswing lengths which he uses as a controller for the distances he hits each club.  He measures the distance his hands travel in the backswing in relation to a clock-face (ie., 9 o’clock, 10 o’clock, etc.), and he has, through repetition, dialed in the distances he is able to hit each club with each length of backswing.

The Lesson: While I highly recommend this clock system approach, I would not necessarily advocate that you go into it so extensively. And regardless: Distance control is key to improving your proximity and playing better golf.

A banner second half of the year, capped by a virtuoso win in Augusta, Georgia, galvanized Dustin Johnson’s spot atop the world rankings.

He was unbeatable in the Fall Masters and it was a joy to behold.  In fact the Sunday “2-Finger” 8-iron he hit into the heart of the par-3 12th green was one of my memorable shots of the year.

When asked about Dustin Johnson’s performance I readily turned to my impression that DJ has always “out-hit” his competition and when he was on few could compete with him.

Now I feel like he has learned to “out-wit” the competition too and this is making him a Tour de Force.  He has achieved this by focusing on, and sharpening his skills on and around the greens.

Pure devotion, repetition and practice can help any sub-standard short-game, and I recommend it if you want to turn your bad days to good, and your good days to great.

Finally, DJ also not only has long drives, he has a very short memory and the combination of those two make for a winning recipe.  I’ve long maintained that “long drives and a short memory are key to consistent success.”

I will never forget the time, when asked why he doesn’t get flustered by bad shots, DJ answered “I try not to get too emotional, whether it’s going really well or going really bad, I always try to stay even keel.”

The lesson: DJ has the mind of a hall-of-famer because of he doesn’t dwell on the bad shots. He forgets them quickly, and then moves onto the next one.