Swing Stories: This 100-shooter’s scores were driving him ‘insane.’ Then he found a fix 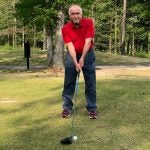 Harry Francis has lowered his usual score to the high 80s and believes he can go lower still.

Welcome to Swing Stories, a new series sponsored by GOLFTEC in which we’re highlighting how regular golfers like you have benefited in considerable ways from getting the right swing advice and/or properly fit clubs. Now on the tee: Harry Francis, 70, of Richmond, Va.

Previous installments: How this teen added 35 yards with her driver to become a college star

For many years, the good news for Harry Francis of Richmond, Va., was that he was able to play the game he loves at some of the most historic courses all over the world.

The bad news? His scores. They were typically between 95 and 100. Or, as he said with no attempt to hide his frustration, it was “enough to drive me insane.”

Time for a change

So three years ago, when he was 67, Francis decided to meet with GOLFTEC instructor Greg Warfel. Francis, who was 15 when he first picked up the game in West Virginia, had taken lessons before. Tons of them. None of them had made a big impact in his scores or his self-confidence. He would, on occasion, head to the first tee and hope, he said only partly in jest, “I didn’t kill somebody.”

With this new instructor, maybe things would be different.

They certainly have been.

Francis has lowered his usual score to the high 80s and believes he can go lower still. He used to drive the ball about 200 yards. Now he hits it 225. And, to his great delight, the ball often ends up in the middle of the fairway.

“I told Greg when I started that if I could shoot 85 on any course I walked on, I would be happy,” said Francis, who manages a medical practice. “I’m not there yet but I’m headed in that direction.”

A share of the credit must go to Warfel. As he’s done with other new students, Warfel spent much time with Francis on simply learning how to make solid contact.

“If you don’t hit the ball cleanly,” Warfel said, “it’s hard to really decipher what else is going on.”

There was a lot going on, and much of it needed work. Not too long ago, Francis took a closer look at what his swing was like in the early days of working with Warfel.

“It was scary,” Francis said.

Francis’s primary fault was that his left arm wasn’t properly extending through impact, leading to what golfers know as the dreaded “chicken wing.”

Warfel worked on helping Francis feel like he was “moving towards the target” throughout his swing with his arms and body. This showed Francis how to move himself in a way that allowed him to be in a better spot at impact and to complete his follow through, which led to better compression of the ball.

“Harry’s elbows were too bent at impact,” Warfel said, “and it was clear that he was trying to keep his head down after impact, which is the worst advice typically given in golf.

To compliment this new move, the pair worked on getting Francis’ hands deeper and more around him on his backswing, which changed his swing path to help him hit straighter shots. It was the one-two punch that Francis’ swing needed.

“A small change in the path Harry’s hands moved throughout the backswing was step 1, but now we’re on to fixing how he turns, tilts and bends himself backward at impact and into the follow-through. Just explaining to Harry how the movement after impact related to improving his ball-striking was the most important time we’ve spent together.”

The two also worked on putting.

“I thought I was a good putter,” Francis said, “but Greg got me closer to the ball. The results were unbelievable.”

Francis recalls one particular day the hard work paid off. It was about a year after his first lesson with Warfel. He was playing at the course he plays most of the time, Sycamore Creek Golf Course in Richmond. He looked at his card. It showed an 85, a score, he said, he hadn’t “seen in a long time.”

I thought I was a good putter, but Greg got me closer to the ball. The results were unbelievable.

During a recent lesson, he said, Francis hit a drive longer than he’d been hitting the whole day. It was off center but still in the fairway. He had come a long way.

“We looked at each other,” Warfel said, realizing, “we can live with that.”

The two used to get together every week. Now it’s about once a month.

Francis is looking forward to more rounds on places such as Pebble and St. Andrews. Rounds, no doubt, he’ll enjoy more than ever.

“I’ll be far more confident stepping on the first tee,” he said.