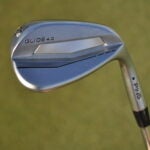 Tony Finau has already made the switch to Glide 4.0.

Tony Finau is particular about his wedges. That’s usually the way it goes when the scoring tools in your bag can make or break a week on the course. Settling for anything but the best possible setup isn’t an option.

When Ping began to conceptualize its new Glide 4.0 wedge, Finau, along with other members of Ping’s Tour staff, were front and center during the design process to offer constructive feedback as the wedge came to life.

“It’s always fun to be able to have a say when a wedge is being created,” Finau said. “Everyone on staff has things they want to see in a wedge, myself included, and Ping somehow finds a way to give us what we’re looking for.”

“During testing, I noticed it wasn’t a huge change from the Glide 3.0 I had, but it launched a little lower with more spin. That’s always something Tour guys are looking for. That’s what I’m looking for. I put it in the bag right away and saw some results right out of the gate.”

Finau’s initial feedback aligns with the key improvements Ping made on Glide 4.0. In an effort to lower the overall launch for control purposes and up the greenside spin, Ping added an Emery blast texture to the face and grooves to generate more friction and interaction between the club and ball. The end result is a noticeably lower launch with more spin.

The 46-, 50- and 52-degree lofts include wheel-cut grooves with a 20-degree sidewall that’s designed to manage spin on full shots, while the 54- through 60-degree offer milled grooves with a 28-degree sidewall and tighter radius for added zip around the green and from the bunker. Ping’s hydropearl 2.0 chrome finish enhances spin from wet and rough conditions by displacing moisture at impact.

During recent head-to-head testing between Glide 3.0 and Glide 4.0, GOLF’s gear experts saw a massive spin improvement (and low launch) on half and three-quarter shots, with spin increasing by as much as 3,000 RPMs with a 5-6 degree lower launch window.

To give the wedge a softer, Tour-esque feel, Ping changed the head material to 8620 carbon steel and added a larger elastomer Custom Tuning Port (CTP) in the back cavity for increased perimeter weighting. Enlarging the overall size of the CTP also allows for 36 percent more face contract, when compared to Glide 3.0, to deliver solid acoustics and feel at impact.

Subtle changes were made to the overall size and shape of the head — as well refinements to the leading edge and hosel transition — to provide a captured look at address. The slightly rounded, compact design is meant to blend seamlessly with the rest of the iron set, something the better player will appreciate.

“Shrinking the profile works really well out on Tour because it helps the wedges blend with a lot of the better player sets,” said Ping senior design engineer Jacob Clarke. “Going from that set pitching wedge, whether they’re playing a Blueprint, i59 or i210, it’s a really seamless transition from a profile standpoint.”

According to Clarke, roughly 65-70 percent of Ping staffers currently play one of the four Glide 4.0 grinds in the lineup without any modifications — a testament to the work that went into bringing each grind to life.

“I’d even say some of the grinds that aren’t straight out of the box only have some heel relief, so it’s not like everyone is making massive changes to the head,” Clarke said. “What’s important to remember is better capture with the ground impacts directly affects trajectory. That’s why it’s so important to get each grind just right.”

The S-Grind offers trail edge and heel relief with ample bounce and a rounded leading edge that fits a large swath of playing types, while the T-Grind brings back the classic half-moon shape designed around relieved heel-toe sections and trailing edge relief. The T is ideal for players who manipulate the wedge — especially the lob wedge — around the green on tight turf conditions. Both the S and T grinds feature a smaller head profile for added confidence and versatility.

The most forgiving wedge through the turf, the W-Grind delivers a traditional full-sole design with a rounded leading edge and profile that’s ideal for square-face and bunker shots. The E-Grind is built around a high toe — an Eye2-inspired version is also available — with improved leading edge shaping, dished sole and tapered hosel for bunker performance.