Inside Tony Finau’s golf bag: 7 things I noticed while inspecting his clubs 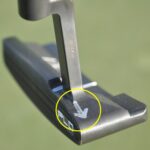 Having covered equipment for nearly a decade, I’ve come to appreciate the way pros go about adding gear to the bag. Each component has a purpose, and it’s always vetted before getting the nod.

During a recent trip to Ping headquarters, I had the opportunity to chat with Tony Finau about the purpose behind the gear he relies on each week at Tour events. Below are seven things that stood out from our conversation.

I don’t know this for certain, but I’d be willing to bet Tony Finau has the biggest grips on Tour. Housed below the rubber on a single Lamkin midsize grip is an obscene amount of tape wraps to build up the handle. That would be 13 wraps for the upper hand and 12 wraps for the lower.

I’m 6-foot-5 and have some sizable mitts, but even Finau’s grips felt oversized in my hands. As he told me while I inspected his irons, there’s a method to the madness behind the grips, and it starts with all but eliminating the taper you typically see in a standard grip.

“I’ve just always liked having a consistent thickness throughout,” Finau told GOLF.com. “I don’t like to feel as if my right hand is coming off the club when I release it. I just want the same feel from one club to the next.”

Finau can get away with tedious grip builds because he’s one of the best players in the world, but don’t expect your local club-builder to offer similar treatment. If you want to test out a larger grip to see if it’s right for your game, start with a mid-size option and go up from there.

It’s gotta be the shoes

As a closet sneakerhead, I was immediately taken by the headcover on Finau’s putter. It’s unlike anything else I’ve seen on Tour, and that’s saying something.

What I would later learn from the two-time Tour winner is that he actually uses the custom Nike Air Jordan I Off-White putter cover on his Ping PLD Anser 2 back putter — the not gamer. I’ve never wanted a putter cover more in my life after inspecting this one from all angles. It’s too bad Tony wouldn’t pass it along.

Finau has two identical PLD Anser 2D putters, but he prefers to use the one with an arrow and alignment dash — situated in the recessed area of the topline — that were added by hand by Ping Tour rep Kenton Oates. As the story goes, Finau was looking for a way to get his eyes and hands in the proper position at address, so Oates added the arrow and dash with a silver permanent marker to see if it did the trick.

“I know if the arrow is too close to my right foot, my face is too closed,” Finau said. “If it’s too close to my left foot, it’s too open. I try to get that arrow in between my feet and I know the putter is pretty square there. The line is a component for where my hands are to ensure they aren’t too high or low. I think a huge part of putting is putting the putter in the same spot each time — and those two lines do just that.”

Alignment lines and reminders are everywhere these days, but if something isn’t available in the marketplace, don’t be afraid to add an arrow or line to the head if it helps improve your setup and stroke.

Before Finau joined Ping in 2018, he was a member of Nike Golf’s equipment staff. When the Swoosh shuttered its hard-goods business in 2016, Finau’s deal turned into an apparel-only agreement. While most of the bag setup has changed in the past six years, Finau continues to carry a Nike Vapor Fly Pro 3-iron. Besides Finau, Brooks Koepka is the only pro still using Vapor Fly Pro after all these years.

The hollow-body long iron is no longer available at retail, but with a backup at the ready, Finau can rest easy knowing he has a replacement should his gamer bite the dust.

“The one I’m using is actually one of my two backups,” Finau said. “My original lasted me about six years. So with my math, if this one lasts me six years, and my other backup lasts me another six years, I’ll be about 50 years old by the time I’m done using both. It’s a great club. It’s one I’ve had in the bag since 2015, and I don’t think it’s going anywhere anytime soon. I hit it great.”

It feels like the Vapor Fly Pro is here to stay — at least until he starts contemplating the Champions Tour.

Finau plays a 9-degree Ping G425 LST driver in the “big minus” loft sleeve setting, which essentially means he’s at 7 degrees of actual loft. With his power and speed, one would assume Finau lives around 2,000-2,200 RPMs to keep spin on the manageable side. Except you’d be wrong.

While low spin can be your friend, especially if you’re a high-speed player, Finau prefers to live on the opposite end of the spin spectrum for a very good reason. Too little spin makes the driver unruly and difficult to control. Instead, Finau prefers a few more RPMs to give himself some room for the occasional miss when the spin rate fluctuates.

It’s sage advice from one of the Tour’s biggest bombers.

Finau is easy when it comes to wedges. He plays a standard grind and doesn’t make any modifications to the sole. His switch from Ping’s Glide 3.0 to the Tour-only Glide 4.0 was a seamless transition that only took a few testing sessions to work through.

“During testing, I noticed it wasn’t a huge change from the Glide 3.0 I had, but it launched a little lower with more spin,” Finau said. “That’s always something Tour guys are looking for. That’s what I’m looking for. I put it in the bag right away and saw some results right out of the gate.”

The fairway wood remains the most difficult club to replace for a majority of tour pros, Finau included. His four-year-old Ping G400 Stretch 3-wood is the second-oldest club in the bag behind the Nike 3-iron for a very good reason. It provides a level of versatility that Finau has yet to find in a newer product.

Instead of trying to force his way into something that doesn’t work, he’s continued on with G400.

“Most guys try to match their driver and 3-wood, but the 3-wood is a tough club to replace,” Finau said. “I like a little bit of a deeper face because I want to hit it off the tee and ground. This club is a perfect fit for me and it’s difficult to get rid of this one. I’ll have it in the bag for many years to come just because it’s come through in tough situations.”