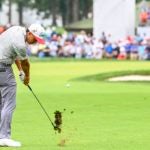 There are ways to reduce wedge spin if you're struggling to keep it under control.

I have a fairly steep entry path to the ball and tend to spin my wedges too much. Other than a change in technique, is there anything gear related that I could do to minimize spin?
— John Wenger

This is a tough one because many of today’s wedges are designed to generate a boatload of spin at impact. The first thing I’d suggest doing — if you haven’t already — is going to a stiffer flex in your wedges. If you’re buying a stock wedge off the rack, there’s a good chance it has a more active tip section (maybe even a wedge-specific shaft) that’s designed to help you feel the head a bit more through impact and assist in generating spin.

We’ve discussed it before in this space, but a large number of tour players use a softer flex in their wedges compared to the irons. Firm greens and thick rough require them to generate ample spin. In your case, playing something that’s on the stiffer side should have the opposite effect. So if you’re playing a stiff shaft in your irons, consider playing the same flex — or maybe even trying an extra-stiff — in your wedges. It’ll help knock off some spin.

Going to a heavier shaft weight is also something worth considering. The extra heft, combined with a stiffer flex, is going to decrease your speed. Considering you don’t really need to generate a lot of speed due to the way your club interacts with the ball, this is probably an idea worth trying.

Micro grooves have also become a common sight on many wedges. The small grooves in between the main grooves are meant to generate extra zip. It might be beneficial to go back and look at some previous wedge iterations to see if there’s something that fits your look preferences and doesn’t have the micros.

While this isn’t a sure-fire winner, I’d test a plated wedge versus a raw version. The plated finish is designed to keep the head from rusting and prolong the life of the grooves; a raw finish will give you a softer feel and you’ll likely see the grooves wear down in a shorter period of time. During testing I’ve conducted, some raw versions have generated less spin than their plated brethren. Others have seen the opposite. That’s why it’s worth testing both to see if there’s a noticeable difference in spin rate.

And I wouldn’t do this on a regular basis, but our pal Gary McCord mentioned on a recent edition of GOLF’s Fully Equipped podcast that Sam Snead used to take a practice swing and leave the dirt in the grooves to reduce wedge spin. If you’re taking up a piece of turf with your practice swing, there’s a good chance your grooves will be caked in dirt.

The grooves won’t be able to grip the ball, meaning you’ll see far less spin on your wedge shots. It sounds like a fine idea, but just remember you’ll probably struggle with something McCord noticed the first time he tried Snead’s crude trick.

“I’m on the first hole [at Cypress] and I drive it down there…that green is tilted, it has to be a 10-degree angle,” McCord recalled. “I hit a flyer and it went 20 yards over the green… I go, ‘Sam Snead you son of a…’ I couldn’t control it.”

Control is somewhat important when it comes to the wedges, so don’t put a lot of weight in Snead’s suggestion. Then again, it’s still worth trying during a casual round to see if it helps in some way.