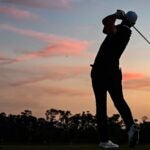 Want to maximize your driver's efficiency? There's a way to do it without including smash factor data.

If you were to compile a list of the most respected names in the equipment industry, Marty Jertson would make the cut. Ping’s vice president of performance and fitting has been with the company since 2003 and played a key role in the creation of some groundbreaking club designs. He also happens to be one heck of a stick. Before turning pro in 2002, Jertson played collegiately at the Colorado School of Mines, where he earned All-American during his final season.

The 2020 U.S. Open was the 6th major championship he’s qualified for in the last decade — all while holding down a full-time job.

Jertson has the resume (and background) to make bold claims — like the one he trotted out earlier this week on Twitter. “Smash Factor is a click-bait golf metric. REC to just avoid,” he tweeted. This wasn’t a cry for attention or an attempt to grab a handful of retweets or likes. Jertson genuinely believes you shouldn’t fixate on the launch monitor metric called “smash factor” during a club fitting.

If you’re unfamiliar with the term “smash factor,” it’s a simple calculation whereby ball speed is divided by clubhead speed on a given shot. The number it spits out is your smash factor, better known as the quality of your strike. For example, a shot rocketing off the face at 125 mph with a clubhead speed of 100 mph will give you a smash factor of 1.25.

For the average golfer, the number is meaningless unless you know what a respectable smash factor looks like. For a driver, attaining a smash factor of 1.5 is the goal. Anything close to that number means you’re efficiently translating swing speed into ball speed.

Finding the middle of the face, while also swinging on plane, will give you the best opportunity to reach the magical 1.5. It sounds like a simple formula for chasing success. Only Jertson doesn’t believe it’s so cut and dried.

In fact, 18 months ago, Ping stopped using the launch monitor metric during fittings after TrackMan’s radar-based device had trouble picking up the middle of the G410 driver head Jertson helped create, before shifting positions to oversee performance and fitting at Ping.

“Radar signals bounce off drivers differently,” Jertson told GOLF.com. “With G410, the TrackMan is bascially confused and thinks the center is closer to the toe. Because the toe is going faster than the heel, it artificially enhances the clubhead speed. Looking at ball speed, ours is going to be higher.”

According to Jertson, the inaccurate smash factor readings were most pronounced in G410 and attributed to the channel in the back of the head containing the “CG shifter.” The channel contains a moveable weight that allows the center of gravity to be adjusted without significantly altering Moment of Inertia.

“For some reason, the CG shifter channel is acting like stealth and confusing the radar,” Jertson said. “I know [TrackMan] is working on it. It’s not a fault of their own; they’re doing the best they can with their hardware. The issue may be fixed or improved with a software update.”

While this is a problem Ping has experienced in recent years, Jertson said it speaks to a larger problem when it comes to any launch monitor spitting out an accurate smash factor reading.

“Measurement devices don’t measure speed in the same place,” he said. “A camera-based unit measures the face, and a radar-based unit tries to measure the middle of the club. If you’re measuring it two different ways, the values are going to be different. The heel and toe are traveling at different speeds.”

Even the smash factor data on the PGA Tour is skewed, to some extent. Recent data showed Ping’s G410 as having one of the lower smash factor numbers on Tour, which Jertson confirmed is not the case.

“All of the lowest smash factors on Tour were with a Ping G410 driver,” he said. “You could look at that and say, ‘Well all those drivers just have a low smash [factor].’ Nope. It’s just the radar reading it with the speed artificially too high. The devices have high precision — that means they’ll repeat the same — but low accuracy. That means the value is not correct; it’s biased. Even tour data is biased because drivers get artificially measured too fast. You draw the wrong conclusion.

“With [Ping’s] 3D motion-capture system, we have accuracy and precision. That’s what you hope for. But even then, it’s where do you want to measure the speed? At the point of impact? The middle of the face? Middle of the club? That’s from the consumer side; they’re all gonna measure differently and have different biases. You’re comparing apples, oranges and bananas in the market.”

So what metrics should you be concentrating on instead of smash factor? Jertson pointed to five that produce the most accurate snapshot of a club’s bona fides: ball speed, launch, spin, attack angle and spin axis/shot bend. From there, it’s possible to use an optimal launch and fitting chart to see where improvements can be made.

Bottom line, it might be time to stop fixating on smash factor and worry about other metrics that’ll be far more impactful in the search to find the best driver for your game.