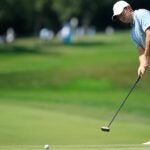 Rory McIlroy fired a second-round 69 at the 2020 BMW Championship after putting his old putter back in play.

It wasn’t long ago that Rory McIlroy was in the midst of an outrageously successful span of golf, but his form has seemed noticeably off since the PGA Tour’s restart. For perspective, from January of 2019 until the canceled Players Championship in March, McIlroy logged an incredible 14 top-5 finishes — including four wins. But in the seven tournaments he’s played since the PGA Tour’s restart, McIlroy has only cracked the top 11 once.

As the defending FedEx Cup champion and Tour Championship winner, McIlroy’s game may be sharpening at just the right time — especially with the U.S. Open and Masters on the not-so-distant horizon. McIlroy is a co-leader through two rounds at this week’s BMW Championship, firing rounds of 70-69 at ultra-tough Olympia Fields.

So what made the difference to help him turn things around? According to McIlroy, it’s been a mix of good driving and a little help from an old friend, his TaylorMade Spider X Copper mallet putter.

“I’ve driven the ball much better over the last couple of days, so that’s been — that’s a huge key to my game,” McIlroy said after his second round. “If I can drive the ball well, everything seems a bit easier from there. And I felt a bit better with the putter. I put my old putter back in the bag. I felt a little more comfortable over the sort of inside-10-feet range, so that felt better.”

Prior to switching to the Spider X, McIlroy was using TaylorMade’s TP Soto blade, which he said he was struggling with on Olympia Fields’ difficult greens.

“I yipped one on 13 yesterday, so that was basically it,” McIlroy said. “It wasn’t a yip, but it was a tentative, very — just not a good stroke, and sometimes with the blade I get a little indecisive or a little unsure of my aim and then during the stroke — especially you get one of these little slippy left-to-righters; at the last minute, don’t miss it right, and then you put the right hand into it.

“I actually putted okay after that and holed some good ones coming in, but I just didn’t feel comfortable,” McIlroy continued. “So going back to something that I’ve putted well with, and I’ve had it here with — I’ve traveled with it the last few weeks. Obviously the blade went back in the bag last week but I still had the Spider with me, but I just thought after yesterday and how dicey the greens are, something where you’re just a little more sure over it is better.”

The change obviously paid off on Friday. Now the challenge will be to keep the momentum going through the weekend.