Wall-to-Wall Equipment: This popular club at the 2020 PGA is a rare sight in pro golf 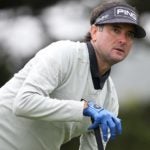 Bubba Watson was one of three Ping staffers who chose to use a 9-wood.

Ping Tour rep Kenton Oates started the week with three 9-woods on the equipment truck. The high-lofted fairway wood routinely shows up in the bags of mid- to high-handicappers who struggle to get the ball airborne and need a spin bump. It’s a launch and spin combination the average pro golfer doesn’t require on a weekly basis.

But major championships are a different beast.

With gnarly rough on tap at TPC Harding Park, Oates watched his meager supply of G410 9-wood (23.5 degrees) heads disappear in a matter of days as Bubba Watson, Matthew Fitzpatrick and Louis Oosthuizen attempted to find suitable options to extricate their ball from the rough with a towering launch and ample spin. All three put them in play. (Fitzpatrick was the lone player who employed a 7- AND 9-wood.)

Those who weren’t quite comfortable with the idea of throwing a 9-wood in the bag opted for a 7-wood. In total, Ping saw eight players opt for a 7-wood. Dustin Johnson, one of the Tour’s big bombers, also chose to use a TaylorMade SIM Max 7-wood for the week. If you’re keeping track at home, Johnson has now used two hybrids and a 7-wood this season.

The course-dependent 9-wood will likely exit stage left after this week, but the 7-wood has staying power in the professional ranks due to the versatility it provides from the fairway and rough.

Collin Morikawa’s driver was the talk of the tournament on Sunday afternoon, and rightfully so. It was his drive on the 16th that ultimately decided the 2020 PGA Championship. Morikawa led the field in driving accuracy for the week with a TaylorMade SIM driver that was only a few weeks old. In the run-up to the tournament, Morikawa chose to go with a new head that featured an additional 5 grams of back weight. The goal for Morikawa was to minimize a slight right miss he started to notice after the Tour’s restart.

Justin Rose’s Axis1 Rose mallet used to feature three alignment lines, but as the Englishman started using the small line located on the topline to aim, the two white lines located on the carbon fiber wings took on less significance. Rose tried to clean up the head by blacking out the lines with a sharpie. They were still visible. Instead of asking for a new putter, Axis1 VP Phil Long made the trek to Harding Park to get Rose sorted, removing the original carbon fiber section and replacing it with an identical piece that didn’t feature alignment lines. Rose ranked third in Strokes Gained: Putting for the tournament.

All in the details

Footage of Haotong Li practicing for hours after his second round went viral. What few probably realized was this is a normal practice routine for Li, who spends endless hours working on his game — and equipment. According to Titleist Tour Representative Liam McDougall, Li wants to know how the ball reacts with a number of different clubs coming into a green during testing.

“For example, in Dubai, he had me stand on the green with my video phone recording how the golf ball reacted when he hit his 4,5,6 and 7 irons into the green,” McDougall said. “He is one of the hardest-working players I’ve ever seen. It is not unusual for him to have 10-hour practice days, including work in the gym.”

Li’s incredible attention to detail goes beyond the ball and into the irons as well, where he places a high priority on constant impact location and consistent flight parameters. To get a handle on the high spin rate he was seeing with his blades, Li switched to Titleist’s T100 irons and had the lofts “halved” to produce the proper flight and spin characteristics.

Tommy Fleetwood did more than insert two TaylorMade prototype irons (4-5) at the PGA Championship. Hoping to mitigate a left miss, Fleetwood worked on his driving early in the week, testing a couple of shafts to find something offering stability for his go-to shot shape — a ball that starts right and turns over with regularity. He eventually landed on a Fujikura Ventus Black 7X shaft for his 8.5-degree TaylorMade SIM driver — the 10.5-degree head is equipped with a 2-degree loft sleeve — that passed the test on the range and course.

What’s next for the Elder Wand?

Tiger Woods’ first go-around with a Scotty Cameron Newport 2 Timeless prototype produced a mixed bag. After closing with 67, the 15-time major winner was asked about the prospects of giving the putter another chance in his next start. Woods refused to answer the question directly, leaving the door ajar for his trusty Newport 2 GSS to make a return.

“Bending over for long periods of time is not easy on the back, as most golfers can attest to,” Woods reiterated. “I haven’t spent as much time over the course of my last, what, five to seven years putting, because I can’t stand over the putts for that long or can’t stand bent over for that long.”

If we learned anything from Woods’ final presser from San Francisco, it’s that he routinely practices with an old 8802-style blade when he’s at home, to ingrain the proper toe release. Arnie would approve.

Gear up for spring golf with these 5 stylish new arrivals from J.Lindeberg