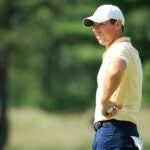 All it takes is one

On the PGA Tour’s ShotLink site, the putt shows up as a miss from 5 feet, 11 inches on the par-3 13th — the lone bogey on the back nine for Rory McIlroy during an opening-round 70. For someone who at the time ranked 156th on Tour from 6 feet (64.4 percent), the mistake seemed harmless enough.

And then McIlroy changed putters — again.

The leash was always going to be short for McIlroy’s milled TaylorMade TP Soto blade. With little in the way of consistency on the greens, McIlroy resorted to trying out different head shapes (and necks) to find a reliable option over the last month, but nothing seemed to click, including the recent TP Soto that featured a plumber’s neck.

The miss on 13 was all McIlroy needed to confirm the putter’s departure.

“I yipped one on 13 yesterday, so that — that was basically it,” McIlroy said. “It wasn’t a yip, but it was a tentative, very — just not a good stroke, and sometimes with the blade I get a little indecisive or a little unsure of my aim and then during the stroke — especially you get one of these little slippy left-to-righters; at the last minute, don’t miss it right, and then you put the right hand into it.”

Shortly after bidding adieu to the misbehaving blade, McIlroy returned to Spider X, better known as the putter he used to log four wins in 2019. Until recently, Spider X was a permanent fixture in his bag setup before the putter went cold. Despite the issues, McIlroy confirmed he hasn’t strayed far from the mallet.

“Obviously the blade went back in the bag last week but I still had the Spider with me, but I just thought after yesterday and how dicey the greens are, something, where you’re just a little more sure over it, is better,” he said.

The mid-tournament change gave McIlroy a quick jolt in the arm, but it didn’t last for 72 holes. The four-time major winner finished T12 while ranking 38th in strokes gained: putting.

Make it two for Matsuyama

Hideki Matsuyama’s T3 showing just outside of Chicago came with two new clubs in the bag — a Srixon ZX5 driver (Graphite Design Tour AD XC-8 TX shaft) and Scotty Cameron Newport 2 putter (LAGP TP135 shaft). The Tour-only driver surfaced several months ago on the USGA’s list of conforming driver heads and appears to be the part of Srixon’s forthcoming product line — ZX Series irons have also made an appearance — with Matsuyama the highest profile name to use the club in competition.

The multi-material LA Golf’s TP135 putter shaft was made popular by Kevin Na, who used it to set a PGA Tour record (in the ShotLink era) at the 2019 Shriners Hospitals for Children Open with 558 feet, 11 inches worth of putts made en route to the win. Matsuyama initially tested the shaft in a Sik putter before having one built in one of his Scotty Cameron Newport 2 backup putters. Based on the technology behind the TP135 design, it’s very likely Matsuyama was able to reduce unwanted head twisting due to the reinforced profile.

In addition to the putter struggles, McIlroy admitted his driver cost him “a few shots” at TPC Boston. With little in the way of downtime before the BMW Championship, McIlroy tested new driver builds at home in Florida in the early part of the week before settling on a TaylorMade SIM with a new Mitsubishi Tensei AV Raw Orange 75TX shaft (tipped 1-inch).

The latest version of Mitsubishi’s counter-balanced product is new to McIlroy, but he’s more than familiar with what the profile is capable of doing on the course. Moderate increases to the spin rate helped McIlroy pick up some much-needed control — he ranked 8th in strokes gained: off-the-tee — that was necessary to handle Olympia Fields. It could also be a benefit in a few weeks at Winged Foot.

Mitsubishi made some efficiency and stability adjustments to the lastest Orange profile, utilizing low resin content prepreg and aluminum vapor to reduce shaft ovaling and enhance energy transfer. Because the material used to make the shaft is thinner, the butt diameter was reduced (when compared to Tensei CK Orange) as well.

Callaway’s Mavrik driver became Abraham Ancer’s driver of choice at the BMW Championship. The 29-year-old traded in his Epic Flash for an 8.5-degree Mavrik (Mitsubishi Tensei Blue shaft) and finished T33 for the tournament. He ranked 28th in strokes gained: off-the-tee on a difficult driving course.

Tour players have endless drivers at their disposal when the gamer doesn’t work. Most opt to test out the backup before resorting to new builds. In Sungjae Im’s case, even his 9.5-degree Titleist TS3 backup wasn’t producing the consistent numbers he was used to seeing. Instead of opting for something completely different, Titleist Tour reps chose to take a more unconventional route to get Im on track, building a new driver to his exact specs (Graphite Design Tour AD DI 7X shaft) with a face angle and sound that matched his original driver. The driver wound up checking every box and made the cut for his bag setup at Olympia Fields.

Best golf gifts: 12 great polos for the golfer on your holiday shopping list