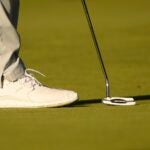 Jim Furyk has never been afraid to spend his own hard-earned money on a putter. Back in 2010, Furyk walked into a Massachusetts golf shop during the then-Deutsche Bank Championship and picked up a second-hand Yes! Sophia on a whim. The putter ultimately helped him win the Tour Championship and a cool $11.35 million in Atlanta.

Three years later, during the 2013 Arnold Palmer Invitational, Furyk showed up at an Edwin Watts in Orlando and walked away with an Odyssey Versa #1 Wide (White/Black/White) that has played a part in two sub-60 rounds — including the historic 58 at the 2016 Travelers Championship — and a U.S. Senior Open Championship.

Outside of some missing flecks of paint and general wear to the insert, Furyk’s Versa is still going strong almost a decade later. One would assume he’d have a backup version of his trusty wand, just in case, but it wasn’t until recently that the 51-year-old started to pick up a few extra copies of the wand. Think of it as an insurance policy.

Hoping to stockpile as many Versa #1 Wide heads as possible, Furyk made a call to Callaway to see if they had a few more in laying around. But there was one problem: Versa inventory was non-existent.

“It’s funny that I didn’t have a backup putter with this shaft,” Furyk told GOLF.com. “I called Callaway and they didn’t have any more of those heads. I said, ‘Really? Well, I’ve got a couple here.'”

But a “couple” wasn’t enough. Instead of sticking with his tried-and-true method of buying putters from local golf shops, Furyk went a different route.

“I went on eBay and bought two more,” he said. “I sent them back to Callaway and they repainted them and made them look brand-new.”

Furyk isn’t the first pro to scour the online marketplace for old gear. Last year, Daniel Berger told GOLF.com that he was going to go on eBay and “order as many sets [of TaylorMade’s MC 2011 model] as I can and ride ‘em out until I can’t find anymore.” True to his word, Berger purchased sets from the website and even brokered deals through social media.

With four backups in his possession, Furyk confirmed he’s “set for a while.” The only thing left to do is perfect the application of the “crooked” putter grip he’s been using since last year.

“I’ve been messing around getting the shaft bend right in my workshop,” he said. “Now I’ve got one [backup] that looks identical [to the gamer] — just in case.”