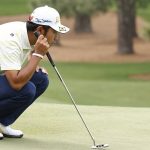 Hideki Matsuyama made a key change with his putter at the Masters.

The bouquets of putters jammed inside Hideki Matsuyama’s enormous staff bag is a common sight during practice rounds. Sometimes it’s three putters. Other times it’s four or five. And on rare occasions, he’s been known to carry a six-pack. When you possess arguably the “coolest” (Scotty Cameron’s words) putter collection on Tour, you want to take everything for a spin, just to see if it works.

Similar to how Dustin Johnson and Adam Scott routinely test a handful of putters each week when they’re out on Tour, Matsuyama doesn’t mind a fresh look during practice sessions. But when the ball is in the air on Thursday, one putter usually makes the cut: the “ace,” better known as a well-worn Scotty Cameron Newport 2 GSS that was popularized by Tiger Woods.

Woods was Matsuyama’s boyhood idol growing up. It’s important to mention this because many of Matsuyama’s putters over the years, including the “ace,” mirror some of Woods’ most important wands. In addition to the Newport 2 GSS, Matsuyama has employed Newport-style putters with nearly identical shaping to Woods’ famous gamer. There’s also one with a Teryllium insert — the same one that helped put Woods (and Cameron) on the map in 1997.

It goes beyond the putter head as well. Following Woods’ decision to drop his familiar Ping PP58 grip last September, Matsuyama chose to do the same in his final Masters tune-up at the WGC-Dell Match Play. Along with swapping out his “ace” for a 2012 Newport 2 Prototype with the same specs, Matsuyama went from a traditional Cameron pistol grip to Lamkin Deep-Etched grip that, you guessed it, is nearly identical to Woods’ current grip.

Matsuyama rarely discusses his gear changes so we don’t know anything definitive, but considering all of the Tiger-esque putter changes he’s made during his career — not to mention the Graphite Design Tour AD-DI shaft in his driver that Woods used for years — it wouldn’t be out of the realm of possibility to say the five-time Masters champion likely played a minor role in the grip change.

Channeling his inner Tiger, Matsuyama carded four birdies and an eagle over the final six holes during the third round, with the new putter head and grip, to grab a lead he’d never relinquish on Sunday.

Historically the toughest hole at Augusta National, the par-4 10th requires a heavy draw (for the right-handed golfer) if you want to gain extra distance. For Joaquin Niemann, he specially built his Ping G425 Max 3-wood with the tee shot in mind, increasing the loft on the fairway wood from 15 to 16 degrees.

Niemann felt the extra degree of loft made it easier to turn the ball over and get it moving down the severe downslope in a hurry.

Bryson DeChambeau officially put a one-off Cobra RadSpeed prototype driver in the bag on Thursday, but the mountain of lead tape previously found on the crown and sole was noticeably absent. The only strips that remained could be found along the heel section of the head.

So what happened to the lead tape? According to Cobra representatives, the strips acted as a hot melt guide early in the week. Once the hot melt was positioned inside the head, a majority of the lead tape was considered non-essential and removed. Rickie Fowler’s RadSpeed driver underwent a similar transformation during his previous two starts at the Players Championship and Valero Texas Open.

It was a good run

Adam Scott’s run with a set of 18-year-old Titleist 680 Forged irons came to an end at the Masters. The 2013 winner opted for a fresh set of 620 MB irons — Titleist’s current muscleback blade — after picking up additional heel-toe forgiveness with a launch and feel that matched his demanding preferences.

With new irons in play, Scott hit 61 percent of the greens in regulations over four days at Augusta National.

Cameron Champ returned to Project X’s HZRDUS Smoke Green in his Ping G425 LST driver (9.95 degrees actual loft) after testing the shaft at home in advance of the Masters. The combination of a familiar shaft and shorter length — 44.25 inches instead of 45 inches — produced a more stable driver with less curve.

Champ led the field in driving distance (323.8 yards) and ranked 12th in driving accuracy en route to a T26 showing.

Matt Kuchar’s search to find a reliable putter continued at the Masters, where he transitioned from a Bettinardi “garage putter” into a Bettinardi BB8 Tri-Plane blade with a LA Golf multi-material shaft. In addition to the new head, Kuchar switched to a right-handed arm-lock, which required Bettinardi reps to lower the loft on the head to 0 degrees to match Kuchar’s stroke — and Augusta National’s notoriously fast greens.

According to Bettinardi, Kuchar had been working with the putter manufacturer’s design team on the concept of right arm lock for several months and experimented with several head shapes and loft/lie angles along the way.

Kuchar tested out an SS28 Arm Lock and the BB8 Tri-Plane prior to arriving on the grounds. In the end, Kuchar felt the combination of the Tri-Plane head and LA Golf was the best setup for the reverse arm-lock method.