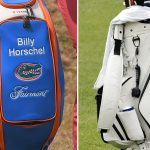 Horschel (L) and Scheffler both use staff bags without a main sponsor on the side panels.

Outside of the golf hat and shirt, no space is more coveted than the golf bag for sponsors. It’s massive and generally finds its way into the television coverage when the leaders are coming down the stretch on Sunday. Depending on the resume and name, the large side panels on the bag can come with a hefty price tag.

For golfers under contract with an equipment manufacturer, the panels are usually part of the deal. Every name currently inside the Official World Golf Ranking top-10 has their respective manufacturer on the side of the bag.

Once outside the top-20 in the world, however, players start to get a bit more creative.

Maybe it’s a financial institution or business that decides to pony up the money for the valuable advertising space. Most golf fans assume that pros are like Nascar drivers: If there’s a space to be had on the bag or their person, it’s going to the highest bidder. Except that isn’t always the case.

Sunday’s championship match at the WGC-Dell Match Play was a reminder that not every golfer on the PGA Tour is willing to take the first endorsement check that comes along. Both Billy Horschel and Scottie Scheffler just happened to be sporting Vessel staff bags with blank side panels — a sight that caught some viewers by surprise.

In Horschel and Scheffler’s case, they have sponsors on their bag (Fairmont for Horschel and Veritex Community Bank for Scheffler), but they currently reside on the front panel. Daniel Berger, who was also in the match play field, has a similar bag sponsor setup with Nicholas Air on the same panel.

One might assume the space on the bag is blank because they can’t land a sponsor, but it’s actually the other way around. According to several equipment insiders who spoke to GOLF.com on condition of anonymity, the side panels for a player ranked in the mid-30s in the world cost somewhere in the neighborhood of $300,000 to $500,000 to a sponsor. That number gets even steeper when you’re talking about one of the biggest names in the sport, like a Brooks Koepka.

For Horschel and Scheffler, it a nice check to have in the bank — but it isn’t life-changing money in this case with the Tour purses players are chasing each week.

In addition to the side panels, neither appears to be in a hurry to ink a deal for their clubs as well. Horschel parted ways with PXG one year ago, while Scheffler has yet to sign a gear deal since he turned pro.

Gear free agency might not be what it was when Koepka, Patrick Reed and Francesco Molinari all won major championships in 2018 without club deals in place, but Sunday was once again a reminder that elite pros are still playing what they want, even with sponsor-less staff bags, on golf’s biggest stage.

Even one of the best pressure putters in the world needs a fresh look from time to time. With Ian Poulter’s Odyssey White Hot XG #7 putter going cold, the Englishman figured he’d change it up for match play, replacing the trusty winged mallet with a Scotty Cameron Phantom X 11 Tour Prototype.

“I’ve always used a No. 7 Odyssey for a while and it’s gone cold,” Poulter said. “So when I look for putters, it’s interesting, because so many great companies — they keep sending me putters. It’s good and bad because there are so many great manufacturers in the world that make lovely putters and they keep turning up on the front door.

“So I am kind of trying them and I’m trying to get the right feel, the right look, and Scotty made me one a week ago, two weeks ago. I told him what I wanted. I wanted some grooves in the face. He did it. It sits right, and that’s all I want. I want something that sits well, that looks nice and feels good. At the minute it’s working out quite nicely.”

Matt Kuchar found his current Bettinardi putter in the unlikeliest of places: his garage. Prior to departing for Austin, Kuchar sifted through his putter stash and happened upon a KM-2 DASS VWS Welded Mid-Slant putter that seemed to check all the boxes.

According to a Bettinardi representative, Kuchar has been tinkering with visuals at address and wanted a different look. The mallet profile differs from the wide-body KM-1 Arm Lock blade he’d been using for some time. Aside from the change in head shape, Kuchar kept the rest of the specs the same.

The KM-2 was originally designed for Kuchar by Robert Bettinardi, during the 2015-16 season, with weights positioned on top of the flange to shift the center of gravity higher for a more consistent roll

Struggling to find his form, Rory McIlroy made a number of significant tweaks in advance of the Masters. The changes included returning to his old TaylorMade P760 (3-4)/P730 (5-PW) iron and Project X shaft setup and inserting a Spider X Hydro Blast putter with a SuperStroke Traxion PistolGT Tour grip.

Unhappy with his putting during a halve against Si Woo Kim on the first day of match play, Tommy Fleetwood benched his longtime Odyssey White Hot Pro #3 putter for a TaylorMade Truss TM1 — and promptly defeated Antoine Rozner, 4 and 3.

Only instead of giving the Truss another chance, Fleetwood promptly reversed course and went back to his White Hot Pro #3. Even a win wasn’t enough to keep Fleetwood and his loyal putter apart for very long.

Ping has a new wedge in the works, but when it’s coming to retail is anyone’s guess. Bubba Watson, Tyrrell Hatton, Louis Oosthuizen and Corey Conners were all seen testing the new Glide Pro Forged wedge, which features a clean profile and the word “Pro” stamped on the back of the head.