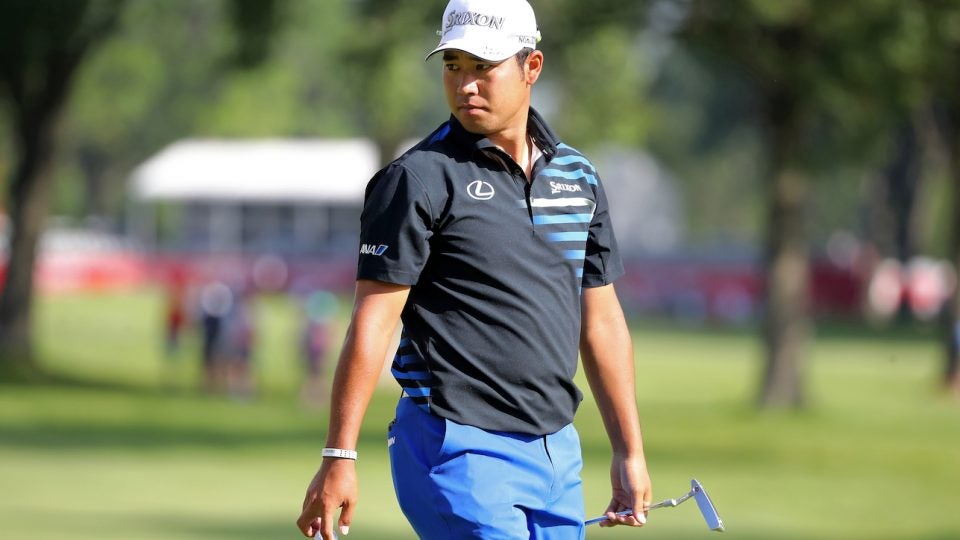 I see you, Tiger

Hideki Matsuyama received his first glimpse at Scotty Cameron’s latest creation during the PGA Championship but waited more than a month to give the putter a shot in competition. The initial version was made from Surgical Stainless Steel (SSS), a high-end head material that differs in feel from the German Stainless Steel (GSS) Matsuyama prefers on his “ace” putter.

Cameron was still waiting on a shipment of GSS heads to arrive during the PGA Championship, which may explain why Matsuyama opted to hold off on taking the putter beyond the practice green.

The putter change wasn’t a difficult one for Matsuyama, who usually relies on a well-worn Newport 2 GSS he calls his “ace.” That being said, there are some differences between the two putters, including a few subtle shaping tweaks straight out of the Tiger Woods playbook.

Compared to Matsuyama’s previous Newport 2, the prototype has a Tiger-esque profile with sharper lines and a more pronounced heel. The overall height appears to have been reduced slightly; the neck also looks to have been pushed back, something Woods prefers in his Newport 2.

History will remember the 2019 U.S. Senior Open for Steve Stricker’s near-flawless performance at Notre Dame’s Warren Golf Course. Equipment enthusiasts, on the other hand, will remember it as the return to relevancy for a set of 13-year-old Titleist 755 irons that had all but been forgotten.

Prior to the Memorial, Stricker chose to bring the irons out of retirement as he began the search for a “new” set to replace the 710 AP2’s he’d used almost exclusively for years.

Steve Stricker’s still out here torching the US Senior Open with Titleist 755 irons in the bag. Go on, ?. pic.twitter.com/EHFcgXEKzP

Stricker played the 755 cavity-back all the way up until 2010 before going on an extended run with Titleist’s 710 AP2 — but he always kept 755 on hand in case of an emergency. A bizarre chain of events eventually led him back to the old set. Before this season, Stricker last used the irons in 2007 when he won five times in two-and-a-half years on the PGA Tour.

“I’ve had some success with those heads, so I said, ‘You know what, I’m going to put them back in and see how it goes,’” Stricker told GOLF.com at the Memorial.

Despite hitting just 9 of 18 greens in regulation during the final round, Stricker was nearly unstoppable with the irons over the first three days, opening with 62-64-66 to take a commanding lead.

Viktor Hovland continued to make changes to his equipment in Detroit, with the latest tweak coming to his G410 LST 3-wood. Working with Ping Tour rep Kenton Oates to achieve a lower flight and mitigate the shot to the right, Hovland added six grams of heel weight and switched from Project X’s HZRDUS Smoke Black shaft to the slightly stiffer HZRDUS Black (80 grams).

The latest version of Ping’s Glide wedge made its debut at the Rocket Mortgage Classic in the bag of eventual winner Nate Lashley. Lashley was one of four players in the field at Detroit Country Club to give Glide 3.0 prototype a shot, along with Cameron Champ (60TS), Bubba Watson (52SS, 56SS and 60SS) and Hunter Mahan (54SS and 58SS).

Speaking of @PingTour, there’s a new Glide 3.0 wedge in Detroit, including an Eye 2 version that’s generating some buzz. pic.twitter.com/rvD1tNI4h8

The big story for Glide 3.0 is the introduction of a classic Eye 2 version that had been missing from the company’s recent wedge lineups. With its classic shape and pronounced toe, the wedge should appeal to golfers who grew up playing Eye 2 in the ’80s and ’90s.

Viktor Hovland and Justin Suh will be playing Titleist’s Pro V1 golf ball under contract for the foreseeable future. The two college standouts came to terms on deals — Hovland already signed a club deal with Ping — that went into effect at the Rocket Mortgage Classic. Both were already playing Pro V1 before last week.

Shoes
Yo, Gear Guy! Is there any difference between yellow and white Pro V1s?

“Titleist has always been the best ball for as long as I’ve been alive,” Hovland said. “I just remember growing up in Norway, we were fishing for golf balls, and we would say, ‘Aw, sweet, we found another Pro V1!’ So, I’ve played it ever since I was growing up, except for maybe a semester and a half, I think, where I played another ball. But I did some more testing and I really liked the Titleist Pro V1. It’s what is the most comfortable and best performing for me.”

It’s time for a change

Jimmy Walker put Titleist’s U500 2- and 3-iron in play at the U.S. Open and resumed the equipment transition during his next start in Detroit, replacing his 718 MB irons with a set of 620 MB prototypes. Walker was close to putting the irons in play at Pebble Beach but felt another week of testing at home could be beneficial.

“I love how clean the back is – no graphics – just Titleist,” Walker said. “They just have a really nice, clean look. They have a satin finish, which is great for me because I think they’ve got a lot less shine to it.  And they’ve just got a really nice shape. Not a lot of offset, which I am a huge fan of – a lot less than the previous MB in my opinion.

“I’ve been an MB player a long time now – longer than I can remember.  I like keeping the flight down, and there’s nothing like a MB when you hit it solid.”

Dustin Johnson returned to TaylorMade’s M5 driver and an Anser-style Juno putter in his first start since the U.S. Open. According to TaylorMade Tour reps, Johnson found more speed and a consistent ball flight with M5, which still features the Fujikura Ventus prototype shaft he’s been using since the Masters.

Gary Woodland’s new Wilson Staff Model 2-iron is not for the faint of heart. With a razor-thin topline and minimal offset, Woodland’s traditional long iron is the kind of club that’s almost non-existent on tour with the rise of utility irons and cavity-back versions offering more ball speed and ample forgiveness.

ICYMI: @GaryWoodland has a Staff Model 2 iron in play this week at the @RocketClassic.#WilsonStaff pic.twitter.com/RTAz5RpwAt

Woodland chose the butter knife 2-iron over more forgiving options, believing it was a worthy addition for Detroit Country Club’s classic layout. Don’t try this one at home, kids.