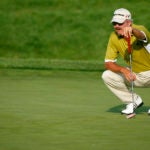 A photo of Gary McCord when he still had an endless supply of putters.

Free golf clubs are part of the gig when you’re a professional. It can be both a blessing and a curse. When you’re struggling, having an endless supply of gear can add an extra layer of anxiety when searching for, say, a putter that doesn’t misbehave inside 10 feet.

Do you go with the face-balanced mallet or a blade with the latest insert? It’s a question every pro has been forced to answer at one point or another. When the new putter doesn’t work, it’s usually discarded in a dark corner of the garage, never to be seen from again.

The putter is a club that can be swapped out on a whim, which makes it easy to accumulate a decent collection if you’re a pro with a respectable career resume.

Former CBS commentator and two-time Champions Tour winner Gary McCord used to have a sizable putter collection — until a fellow pro decided he’d eliminate it during a Halloween party.

During an interview on GOLF’s Fully Equipped podcast, McCord recalled the day Andrew Magee — yes, the same Andrew Magee who recorded the only ace on a par-4 in Tour history — started a backyard bonfire and used McCord’s entire putter collection as kindling.

“It was a Halloween party and we’re all just having a good time in the backyard, and I smelled something,” McCord recalled. “So I look over, and Andrew got with the guys, and he got a bonfire going in my backyard, and he went into the garage and he took out every putter that was in my garage and he burned it to the ground. Every putter.

“There must have been a hundred putters. And I come out and there’s smoke going everywhere, and I’m smelling this resin and stuff, and I look over and he is laughing his rear end off. I forgot who he was dressed as, but they burned all my putters. All of em. Every one of ’em. The only one I had left was in my bag so I had to start over. So that’s one of the reasons I don’t have any putters.”

For someone who was struggling with the flat stick, Magee may have done McCord a favor. What he didn’t appreciate was the mess a pile of 100-plus melted putters left in his backyard.

“When grips melt, and I have rocks in the backyard, they melt and I have all these rocks, and there was this giant 20-foot diameter black thing and I couldn’t get rid of it! And Andrew didn’t care.”

Considering a DIY gear project? Grips are a great place to start