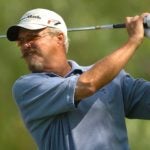 Most golfers know Gary McCord because of his popularity as a broadcaster, but he’s also played in over 400 PGA Tour events. Although he finished second a couple times in the 1970s, he never cracked the winner’s circle.

McCord is in the record books, though. In 1984, he finished on top of the hotly-contested, season-long “fewest putts” category, and he did so in a way that only McCord would think to do. On our recent Fully Equipped podcast, McCord told the hilarious story of how it went down.

Heading into the final round of the 1984 Pensacola Open – the last tournament of the year for him – McCord had a slight lead over George Archer in the fewest putts category. With his career on a downturn, McCord really wanted to win it.

“I knew at that particular point my career sucked, and it wasn’t going anywhere,” McCord said. “So, this was the only thing literally I was going to win.”

Ahead of the final round, McCord crafted a plan to minimize his number of putts as much as possible in order to lock up the win. Playing alongside Archer and Peter Oosterhuis, McCord planned to miss every green in regulation. That way, he’d have a better chance to get the ball close to the hole for his first putt and reduce the odds of three-putting. It’s easier to chip the ball close from around the green than hit it close with iron from the fairway, right?

“This is the only thing I’m probably ever going to win on the Tour,” McCord said to Archer on the 1st tee. “And I’m telling you right now, I’m going to miss every green short.”

So, with this scheme in mind, McCord told his caddie to give him the yardage to the front of every green, but to take 5 yards off the number. And it worked. According to McCord, he missed every single green that day and beat out Archer for the fewest putts category.

“I was very good at getting the yardage right, because I never hit a green,” McCord said. “And [Oosterhuis] was laughing his rear end off every time I hit a shot into the green.”

This tactic is not recommended to shoot lower scores or win tournaments, but it’s a hilariously genius way to cut down on your total putts.

If you want to hear more classic stories from McCord, make sure to listen to the entire podcast below, or here on iTunes.

These are the sunglasses Hideki Matsuyama wore during the 2021 Masters