Then vs. Now: Looking back at Phil Mickelson’s gear setup for the 2006 U.S. Open at Winged Foot 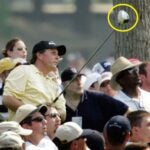 Phil Mickelson pictured during the final round of the 2006 U.S. Open at Winged Foot.

Whether it’s fair or not, the 2006 U.S. Open at Winged Foot has gone down as the event Phil Mickelson (and Colin Montgomerie!) lost, rather than the one that Geoff Ogilvy won. At the time, Mickelson was coming off two straight major wins, and all he needed was a par on the 72nd hole to win his first U.S. Open. Obviously, that didn’t happen, as Mickelson infamously made a soul-crushing double bogey.

With five major wins and 44 PGA Tour victories to his name, Mickelson has accomplished more in golf than most can dream, but he still doesn’t have that coveted U.S. Open victory. The 2006 event was Mickelson’s best chance to date, but it’s not over yet.

Now, at 50 years old, Mickelson comes into the 2020 U.S. Open at Winged Foot following a recent win in his Champions Tour debut.

In this article, we wanted to take a trip down memory lane and look at the clubs Mickelson employed during the 2006 U.S. Open, and compare them to his current 2020 setup as he returns to Winged Foot for his revenge.

A lot has changed in Mickelson’s bag in 14 years, and in the world of golf technology in general. Let’s dive in!

Just months prior to the 2006 U.S. Open, Mickelson won the Masters using two different Callaway FT-3 drivers; one was setup for a fade and the other was setup for a draw. As the U.S. Open drew near later that year, however, Mickelson ditched the dual-driver setup.

Interestingly, though, Mickelson tasked legendary wedge designer Roger Cleveland with making him a special Callaway X-Tour 64-degree wedge to deal with the thick rough and difficult bunkers around the greens at Winged Foot in 2006. Aside from the 72nd hole blunder, the 64-degree wedge worked wonders that week, and Mickelson still employs 64-degree wedges regularly today.

Here’s the full setup Mickelson used for the 2006 U.S. at Winged Foot:

Recently, following Mickelson’s win on the Champions Tour, we were lucky enough to host Gerritt Pon on our Fully Equipped podcast. Pon – better known as “Mickelson’s equipment guy” for the last decade – went in-depth on Mickelson’s current gear setup, and what it’s been like working with him.

If you’re interested in listening to Pon’s full breakdown of lefty’s equipment, check out the full podcast below.

Below is a breakdown of the clubs Mickelson recently used for his Champions Tour victory. He will likely use a set makeup very similar as he competes this week to win his first ever U.S. Open trophy.