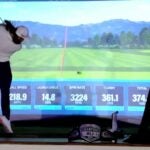 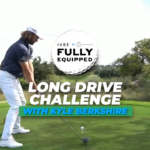 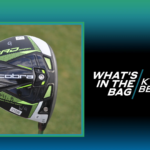 During a recent video shoot in Austin, Texas, GOLF.com had the opportunity to do an equipment deep dive with two-time World Long Drive champion Kyle Berkshire. Here are 7 things that stood out from the conversation.

Even if you don’t have Kyle Berkshire’s speed, it’s important to possess a set of clubs with proper loft gaps. If the gaps are less than four degrees from one club to the next, it’s very likely you’ll wind up with clubs that go similar yardages — leaving you with a sizeable hole somewhere in the bag. Having to constantly step on a 6-iron or taking something off a 5-iron simply isn’t feasible for the average golfer.

The two-time World Long Drive champion still fiddles with the gapping on his setup, but thanks to a tip from four-time PGA Tour winner Camilo Villegas, he’s learned to stop fixating on the number stamped on the sole and concentrate on the specific iron loft that allows him to hit ideal yardages with every club in the bag.

“At my speed, gapping is a tremendous challenge,” Berkshire said. “We’ve stuck with a four-degree gapping throughout the bag, but I don’t look at my 9-iron as a 9-iron — I look at it as a 40-degree club. I learned this from [tour pro] Camilo Villegas about a year-and-a-half ago while playing at the Bear’s Club. I went through his bag and he showed me how his clubs were labeled with degrees, not the number of the iron, which is genius because you can have a strong or weak iron.”

If you know a good club-builder, it’s possible to have the lofts stamped on each head. But it’s very possible those lofts could change over time with wear and tear. It’s one of the reasons why golfers should get their lofts and lies checked at the start of each season to ensure the specs are still in good working order.

For those with a gapping issue, the fool-proof fix is to get with a certified club-fitter and conduct a full bag analysis. Let the expert take a closer look at your lofts and lies to determine if a club or two needs to be bent to fix a problem yardage.

We all have a favorite club in the bag we use for testing and practice sessions. It feels comfortable in our hands and tends to be a good barometer when trying to determine if that new set of irons is really worth four figures.

For Kyle Berkshire, the club he uses for testing and potential swing changes is a mid-iron.

“I like the 8-iron because it’s a pretty middle-of-the-road club for my bag,” Berkshire said. “I’ve had to bend that club back and forth more times than I count because I’m using it a lot, and I’m normally swinging the club at 110 mph.”

If you want to read up on the differences between hard and soft stepping an iron or wedge, check out this link. For those who don’t have the time, just know that hard stepping makes the shaft firmer, reduces spin and lowers launch.

If you’re Kyle Berkshire, it’s one of the ways you make a set of irons playable.

But what happens when even a single hard step and a beefy set of True Temper Dynamic Gold X7 shafts — arguably the stiffest steel product on the market — fail to do the trick? You do a “double hard step,” which is almost underheard of in the industry. (Don’t try this at home, kids.)

Kyle Berkshire makes hay bashing drivers for a living, but it isn’t his favorite club in the bag. The title goes to a 12-degree King Forged Tec prototype utility iron that travels over 300 yards with 200 mph ball speed when Berkshire catches it out of the middle of the face.

The club is so good, it has turned his driver into a secondary option off the tee.

“I’m a golf purist at heart, I love the game” Berkshire said. “This is my favorite club in the bag, no question about it. But I also feel like Cobra would agree. They’re extremely proud of this club. The biggest problem I’ve had over the course of my career, especially when I got to certain club speeds, is being able to use hollow cavity clubs because they tend to cave at certain speeds. Cobra did a tremendous job with this club. It took over five months of development. What they decided to go with was a foam insert with metal infused into the material to give it just enough support so I can swap it out every 2 to 3 weeks, which is a huge win for me.”

Several weeks of use equates to roughly 300 to 400 hits for Berkshire, which is a significant improvement from the previous product that lasted just 15 to 20 swings before the face failed.

When you’re the biggest bomber on the planet, you receive a boxing-style belt for winning the World Long Drive. Carrying the belt around in your golf bag isn’t practical. But you know what is practical? Adding a silhouette of you hoisting the belt on the sole of your putter.

It’s the ultimate flex if you’re a long-drive champ.

Having the ability to smash the ball over 400 yards makes Kyle Berkshire a human cheat code. But even the champ realizes there’s a difference between keeping it on the grid at a long drive event and splitting the fairway on a tight par-4. Instead of rolling with a 48-inch Cobra RadSpeed driver, Berkshire prefers to use a 45-inch version when he’s trying to break 70. (He’s a plus-two handicap, which doesn’t seem fair.)

“I swing [the driver] 140 to 142 miles per hour on the golf course,” Berkshire said. “I’m just trying to play a pull-fade and get it started on line. My main goal is to keep it in play. I typically won’t pull out a driver unless I have a lot of room to work with. I don’t really feel the need to use it unless there’s an obvious advantage and the hole is massively wide. That’s when I’ll let it go.”

To play a pull fade — he’s normally trying to hit a rope draw with his 48-inch driver — Berkshire adds strips of lead tape to the toe in an effort to slow down the face rotation through impact. It’s a go-to shot shape and driver weight setup you’d typically expect to see on Tour.

Prior to the start of this year’s World Long Drive Championship, Cobra made 30 RadSpeed heads for Kyle Berkshire and Bryson DeChambeau to use.

“Bryson went through two heads — and I went through 27,” said Berkshire, who topped 159 miles per hour clubhead speed during the competition. “We had one head left.”

Cobra simply didn’t anticipate Berkshire getting anywhere close to the numbers he was putting up during competition — and neither did Berkshire.

“I couldn’t believe how fast I was, and it was honestly a problem,” he said. “We had to adjust. Throughout prep, I had a few swings in the upper 150s, but nothing that sustained, so we had to make adjustments. We had to completely change our game plan and plan for these heads to be blown up because there was nothing we could do.”

The face on Berkshire’s driver starts with a CT of 215 and is then shaved to make it marginally faster — up to 230 — while still staying within the USGA limit of 256.

“If we’re being honest, 230 is not super-fast,” Berkshire said. “Most Tour players have a CT in the upper 230s or low 240s. Mine is still a slower head than most on Tour, but even then the heads were still blowing up. I feel like Cobra was the only company equipped to handle this. [Cobra Tour rep] Ben Schomin and my coach Bobby Peterson did a phenomenal job keeping me in a rhythm and changing out the heads. The speeds I was producing, we weren’t ready for them.”