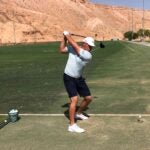 The Pro Long Drivers Association is back for a second season, and it has a new owner in the fold.

It’s early morning in the desert in fall 2021, and Mesquite, Nev. is cold. The sky is draped in a carpet of blue, but the sun hasn’t quite peeked over the mountains in the distance. The resultant temperature is brisk, and the wind is gusting over the plain, dropping the air temperature considerably further.

Not that any of that matters to Bobby Peterson. Peterson is a large, broad man, and he’s rocking the same wraparound sunglasses, quarter-zip jacket and generally delighted temperament I’ve seen every day since I first stepped on-site in Mesquite.

Peterson is the de facto commissioner of the Pro Long Drivers Association, a player-run, player-funded long drive tour that launched its second-ever season last weekend. He’s something of a long drive expert, running his own shop in distance-building out of a warehouse in Newton Grove, N.C. Peterson’s One Stop Power Shop is frequented by what feels like half of the professional long drive circuit — and his name carries fierce loyalty among the constituency.

Peterson is a sharp businessman, which is why I’m wondering how he became the Pro Long Drivers Association’s foremost angel investor. In early 2020, when Golf Channel dropped its long-standing relationship with the sport, Bobby and a small group of pros got to work drawing up the bylaws of a new professional league that wasn’t reliant on outside money. Soon, the group had formed a new membership and entry fee-driven model.

Now, it’s late 2021, and the league is holding its first-ever World Championship with Bryson DeChambeau in the field. It’s all an impressive affair, but is it profitable?

Peterson shoots me a smile.

“If you take close care of your pennies, your dollars start to make sense,” he says.

Clearly, the dollars make some sense, because this past weekend, the PLDA returned for its second-ever season with its “Desert Launch” event, also held in Mesquite. Kyle Berkshire, the reigning world champion, kicked off the season with a win in the event.

The event marked the first of 11 for the circuit in 2021, which features tournaments in Japan, Denver and Ontario. The season will conclude with the PLDA World Championships held in Mesquite in early October.

Another significant development for long-drive diehards: Bryson DeChambeau has joined the league as “a part-owner” — ensuring his continued interest in the sport heading into the future. DeChambeau has been a longtime supporter of the sport on his social media feeds, which show him frequently hanging out with and seeking distance-boosting counsel from long drive professionals.

At the World Championships in September, Bryson was a key part in driving hundreds of thousands of impressions to the PLDA website and social media feeds. He made it into the quarterfinals of the championships, losing to eventual winner Kyle Berkshire.

But, he insisted, his entrance in the tournament wasn’t about winning, but rather about helping the struggling circuit find long-lasting success. With his ownership stake, the former major champ appears to be tying a chunk of his bank account to that claim.

“These guys all have families and lives and this is usually their hobby or second job,” DeChambeau told GOLF.com at the time. “They’re just trying to survive, a lot of them are, and I think they need to be getting support. Support from the world of golf, and support financially. This is the best way for me to do that. So why wouldn’t I? Why wouldn’t I do what I can to make this thing what it should be?”