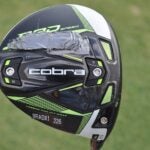 Kyle Berkshire is a two-time World Long Drive Champion who’s capable off launching the ball in excess of 400 yards without breaking a sweat. Mashing the ball is how he makes a living, but Berkshire isn’t a one-trick pony. In addition to playing collegiate golf at the University of North Texas and Central Florida, the 24-year-old currently carries a plus-two handicap and a game that travels.

Many would assume he simply overpowers the course with his prodigious length — which is partly true — but during a recent conversation with GOLF.com’s equipment team, Berkshire revealed he seldom uses his 45-inch Cobra RadSpeed driver — he normally uses a 48-inch build during long drive competitions — on the course.

In fact, he might only pull out the big stick a couple of times.

Instead of subscribing to the old “let the big dog eat” golf adage, Berkshire prefers to make his way around the course in a more methodical manner.

“I swing [the driver] 140 to 142 miles per hour on the golf course,” Berkshire said. “I’m just trying to play a pull-fade and get it started online. My main goal is to keep it in play. I typically won’t pull out a driver unless I have a lot of room to work with. I don’t really feel the need to use it unless there’s an obvious advantage and the hole is massively wide. That’s when I’ll let it go.”

Of course, that doesn’t mean he’s simply laying back and taking more club into the hole. He has a secret weapon that still allows him to routinely carry it over 300 yards — and it isn’t a metalwood.

“I’m a golf purist at heart,” Berkshire said. “The 1-iron is my favorite club in the bag, no question about it.”

“[Cobra is] extremely proud of this club,” Berkshire said. “The biggest problem I’ve had over the course of my career when I’ve gotten to certain clubs is the face has a tendency to cave, like on a hollow club.”

The retail version of King Forged Tec features foam microspheres inside the hollow cavity to tune sound and improve feel, but the foam material wasn’t sturdy enough to withstand repeated blows at 130 miles per hour. After going through several prototypes, Cobra hit on a metal-infused version of the foam material that allows Berkshire to use the long iron for 3-4 weeks before he needs a new one.

Berkshire described the club as an “absolute rocket” — and rightfully so. With a launch angle around 10 to 15 degrees and spin rate in the mid-to-high 2000 RPM range, it’s essentially a driver disguised as a long iron. During a recent tournament when the adrenaline was flowing, Berkshire said he recorded 200 mph ball speed with the club.

“I’ll hit it 80 percent of the time on the course,”he said. “It’s such a massive weapon. I can routinely hit it 300 yards off the tee, which gives you so many options.”

Berkshire might be the only golfer on the planet who can boast of having an iron that’s as long as most drivers, but if you have that kind of advantage, you most definitely should use it.