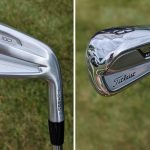 The two-year wait is finally over: Titleist’s new T-Series irons are making their debut this week at the Travelers Championship and based on the initial feedback from players in the field, they could see immediate action at TPC River Highlands.

The start of Titleist’s Tour seeding and validation process gives pros the opportunity to try the irons for the first time, offer feedback and potentially put them in play. The T-Series lineup will eventually consist of a redesigned T100, T100S and T200, but only the T100 was made available to players this week. Titleist confirmed a new T200 would eventually make its way to Tour in the coming weeks.

Along with the release of T100, Titleist also unveiled its next-generation U505 utility iron that will replace the U500 and U510.

For the moment, Titleist is offering few details regarding the technology housed inside the irons (and utility iron), but that doesn’t mean we can’t offer analysis based on in-hand photos from the Travelers.

Here’s what sticks out when comparing the 2019 T-Series to the new 2021 version.

To say Titleist has been busy cleaning up T100’s cosmetics would be a massive understatement. The 2019 version still looked somewhat like the AP2 it replaced. The next generation, however, features a refreshed, minimalist look and compact cavity design. A stain chrome appears to have replaced the polished chrome finish as well.

A raised strip of metal can also be found where the cavity steps up to the muscle pad — a visual clue that there might be additional tech underneath the hood. You need somewhere to house the dual-density tungsten weights that have become an iron staple.

The 2021 T100 (right) sports a thinner topline and refined hosel transition when compared to its predecessor. The overall shaping of the toe — and possibly even the amount of offset — have been adjusted as well. For the better player, these irons could check all the boxes.

The 2021 T100 and T100S have a similar look and feel. The T100S will likely still have stronger lofts — it was a difference of 2 degrees with the previous version — for those who crave more distance. To account for a reduction in loft, the soles, leading edges and center of gravity locations were adjusted across the board on the previous version. Expect something similar on the updated model.

As for the U505 utility iron, the wider sole is the big story. For golfers who still can’t decide between a hybrid or utility, this club could be a game-changer. The looks of an iron combined with the performance and turf interaction of a hybrid make for an intriguing combination.

The irons remain a Tour-only option at the moment, but if the T-Series sticks to its 2019 release schedule, the golfing public will only have to wait until August or September to get their hands on Titleist’s newest sticks.