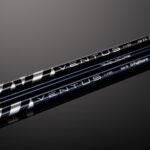 Fujikura’s Ventus shaft has seen a significant uptick in Tour usage since it was introduced at the end of 2018. During the 2020 Northern Trust, Ventus led the way (23/34) as Fujikura topped the driver shaft count in Boston (27.6 percent).

As Ventus has continued to rise in popularity, the shaft manufacturer has expanded the line to include different launch and spin profiles, including a Red and Black to complement the original Blue.

With a multitude of driver and fairway wood parts in the lineup, Fujikura has turned its focus to the hybrid and utility iron sector with the new Ventus HB shaft. Available in a mid-launch Blue and low-launch Black profile, the stable shaft is designed around the same VeloCore Technology found in the driver and fairway products.

According to Fujikura, the proprietary multi-material bias construction design boosts clubhead performance through maximum energy transfer and works in tandem with an accelerated taper design to enhance load and feel at impact.

The low torque and tip-stiff design is built to deliver consistent yardages and an improved dispersion pattern, whether it’s placed in a hybrid or utility iron. The inclusion of Pitch 70 Ton Carbon Fiber in the multi-material core is a chief reason why the club is able to reduce unwanted twisting from the tee and turf.

Fujikura’s HB Blue and Black shafts come in multiple weights and flexes with a retail price of $200.