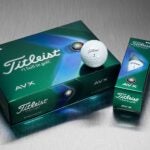 More greenside spin and distance. It’s a recipe literally every recreational golfer wants with the golf ball in their bag — and one Titleist has strived for with its third-generation AVX golf ball.

Distance can be achieved in a number of different ways, but in Titleist’s case, the goal was finding a way to bump up greenside spin while squeezing extra distance out of a ball that already generates low launch and spin characteristics.

A reformulated core is the engine that makes AVX go. By increasing the stiffness of the outermost portions of the core — while leaving the inner core soft for short game performance — and sandwiching a high flex casing layer between the cover and core, engineers were able to produce a ball that goes faster than its predecessor, with incremental low spin in the long game department.

And then there’s the “free distance.” Nothing in life is truly free, and that’s the case with the new 348 catenary dimple pattern found on the urethane cover. In development since 2013 — it was initially part of Pro V1 and Pro V1x evaluations — the dimple pattern went through hundreds of iterations before the final version was selected after an arduous nine-year process.

You might not be able to tell the difference between the dimple pattern found on the last two versions, but there’s a major benefit that comes with unlocking distance through an optimized launch — assuming you can figure out the puzzle. With AVX, the new dimple pattern enhances consistency downrange.

“We’re always designing new dimple patterns,” said Mike Madson, Titleist’s director of aerodynamics and research engineering, “but we can only pull those into the product development side when we find something we really like. With construction changes, it’s very much like the levers where when you pull one, something else has to give. You always have to balance that performance. With aerodynamics, if we find something that’s really good, you don’t have to change any parts of the construction — you’re just going to get some free distance.”

Going back to the levers analogy, pulling the lever for distance usually comes with a tradeoff in greenside performance. To allow for benefits off the tee and around the green, a softer urethane cover was added to help generate more greenside spin — a priority for testers who offered feedback during the development process.

“We’re never going to increase the performance in one area and make sacrifices elsewhere,” said Frederick Waddell, Titleist’s director of golf ball product management. “Going to a softer cover delivers performance around the green while still maintaining the low spin long game performance golfers have come to expect from AVX.”

Titleist’s third-generation AVX will be available Feb. 4 for $49.99 per dozen in both white and high optic yellow.