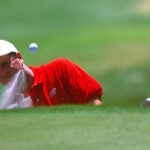 Stewart Cink was at first skeptical of the ProV1.

Twenty years ago this month, Titleist launched its revolutionary, multi-layer Pro V1 balls to PGA Tour players at the Invensys Classic of Las Vegas. That week, an astounding 47 players switched to the new Pro V1 ball, including the Invensys Classic winner, Billy Andrade; not a bad start, and the momentum never let up. Since that week, Titleist’s Pro V1s have been widely recognized as the game’s best balls for 20 years.

The Pro V1 was special because it combined two different worlds that were previously separate. Before 2000, golfers had to choose between wound-core balls, which were soft and spun a lot so they were easy to control, and solid-core balls that offered more distance. The wound-core balls weren’t very long, and the solid-core balls didn’t feel or perform very well.

Then came the Pro V1 that offered the best of both worlds with its solid core construction (from Titleist’s distance balls), surlyn casing (from Titleist’s performance balls) and a 392-dimpled urethane cover. For professionals and amateurs alike, the formula worked.

These days, Titleist pumps out 300,000 Pro V1 (and Pro V1x) balls per day in its 225,000-square-foot Titleist Ball Plant 3 facility in New Bedford, Mass. Today, it’s almost impossible to imagine the golf world without Pro V1 balls, but would you believe that some pros were initially skeptical of the product?

Fordie Pitts, who started working for Titleist in 1993 and is currently the Titleist tour consultant for golf ball R&D, remembers testing the early prototypes for the Pro V1 as far back as 1997, and it wasn’t an immediate home run.

“Those (wound) balls had a lot of spin and that’s how the game was being played at the time,” Pitts said. “Years prior to the launch in 2000, we had taken a solid-core product to the players and a lot of them were a little skeptical at first. The feel was a little bit different. The spin wasn’t as much. … I think the attitude back then was you needed spin and a lot of it.”

Early prototypes for the Pro V1 didn’t make much of a splash in the industry, and wound balls continued to prevail on Tour. Tiger Woods may have had a hand in changing that, though. Woods — who now uses a Bridgestone ball — famously switched to a solid-core Nike ball and dominated the 2000 U.S. Open. Players started to take notice, and realized they may have been mistaken about solid-core balls.

“Tiger came on the scene and was blowing it by everyone else and all of the sudden guys were like, ‘Wait a minute, let me rethink that product,’” Pitts said. “So we brought it back out again.”

While most pros were clamoring for the new Pro V1 during its official launch in 2000, there were still skeptics. A young Stewart Cink was one of them.

Cink had already won a few PGA Tour titles and he was comfortable using the wound-core Titleist Professional ball. While he finished T3 that week in the 2000 Invensys Classic, he acknowledges he missed the early train on the Pro V1.

“I was not accustomed to the way that the Pro V1 launched so high and I was scared of it if it got windy,” Cink told GOLF.com. “They assured me that [the 2000 Pro V1 ball] spins less, so it goes through the wind better. And I was like, ‘Eh, I don’t buy that.’ It was just an era where we didn’t use Trackman; we didn’t have anything like that. We just used our own eyes and if it didn’t launch into a window that we were used to seeing, then it just wasn’t right. That [thinking] was just flawed. Now we have a lot more empirical information to go by that says, ‘That’s flawed.’”

Phil Mickelson (he finished second in the 2000 Invensys Classic), and who now plays Callaway balls, was an early adopter of the Pro V1 that first week in Vegas. He gave Cink a bit of prophetic wisdom.

“I played with Phil on Sunday and he had switched and I hadn’t,” Cink said. “I remember discussing it with Phil a little bit. He asked why I hadn’t switched, and he was like, ‘Man, you have to switch. This is the future.’

“He was right. I knew he was right. I just wasn’t quite ready to make a big switch. At the time I was a little bit more averse to change. Over the course of time I’ve become way less averse to making changes and basing more of my decisions on the empirical type data instead of what feels good and what emotionally I’m secure in. But I think that’s been a good change.”

Looking back on it, Cink says the launch of the Pro V1 was the moment where the still-relevant distance debate began.

“We can talk about drivers all day, shafts and athleticism and Trackman, but the golf ball was the really big factor that changed distance,” he said. “The Pro V1 was the biggest factor of the golf balls. It was the first time that really good players en masse switched over to a solid-core ball.

Cink continued using a wound core ball after that week in Vegas, but the trend was catching on rapidly.

“I remember distinctly I went from here (Vegas) to the Presidents Cup,” Cink said. “I was playing the wound ball and everyone else had switched to the Pro V1 and I was giving up distance and I was starting to recognize it. I had a great Presidents Cup and I won all my matches, but I was starting to see like, ‘Whoa, the distance thing is a factor here.’ Guys I used to be longer than are now longer than me.”

Twenty years later, Titleist is this week launching yet another Pro V1 ball (and a Pro V1x ball, too). Will this be as game-changing as the Pro V1 from 20 years ago? Will 47 players in the Shriners Hospitals for Children Open field make the switch?

Pitts knows that’s simply not a realistic possibility these days.

“I’d love to say we’ll have that big jump in distance gains like we had going from a wound ball to the Pro V, but we don’t live in that world so much anymore,” Pitts said. “We’re making little smaller adjustments and distance is one of the things we look at, but it’s about complete performance, too. Sure, if we just designed all of our golf balls to go far, we could do that, but that’s not going to satisfy all the players that we have.

Yes, the world is different now. But at the 2020 Shriners Hospitals for Children Open, two decades after the initial launch of the Pro V1, pros were still lined up to test the new versions of the balls.

And, yes, that group included, Cink, who says he’ll likely switch to the new Pro V1x after just one swing with it.