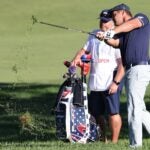 On the Friday evening before the U.S. Open at Winged Foot, Adam Rehberg, Bridgestone’s golf-ball-fitting manager, and other members of the company’s ball team logged on to Zoom to run through a presentation. In the era of Covid-19, video calls have become ubiquitous.

Only this wasn’t the standard project check-in. Staring back at Rehberg on his computer screen was Bridgestone staffer Bryson DeChambeau.

Just hours prior to the call, DeChambeau had put the finishing touches on a second-round 69 at East Lake Golf Club, site of the Tour Championship. With $15 million at stake, every player in the field had their eyes locked on the prize, DeChambeau included. But at the same time DeChambeau was chasing a potential financial windfall, he was already deep into the process of formulating a plan to handle Winged Foot.

During the call, the Bridgestone team laid out charts and graphs to show DeChambeau their data findings from several weeks of testing.

“The Zoom call was basically like what we do with a client, showing the data and screen-sharing findings from the swing robot,” Rehberg told GOLF.com. “Only the guy on the other end is one of the best golfers in the world.”

DeChambeau already knew the rough was set up to penalize wayward shots, but if he could put a number on how the ball would react and amount of spin that would be lost on, say, a flier lie from certain distances, it would allow him to create a blueprint for the club(s) he could hit from specific yardages. With one of the fastest club-head speeds on Tour, DeChambeau figured he could generate sufficient spin, and a playable ball flight, from the rough to score around the course — even if he wasn’t finding the fairway with a nuked drive.

“If he normally generates 10,000 RPMs with a pitching wedge from a clean lie and knows a flier will knock the spin down to 7,000 RPMs, he’s able to calculate how much longer he’ll hit it in that situation. A lot of players are just guessing when they get a flier. The testing we conducted was all about helping him build those numbers for the clubs he figured he’d use often on approach shots — 8-iron, 9-iron, pitching wedge.

According to Rehberg, this wasn’t the first time DeChambeau had spent an inordinate amount of time in the deep rough gathering data. During the creation of Bridgestone’s Reactive cover, DeChambeau logged hours blasting balls from the deepest rough at Bridgestone’s golf-ball-testing facility to understand how the ball reacted in a worst-case scenario.

“Most guys are chipping shots around the green to see how the ball reacts during testing,” Rehberg said. “Bryson’s out here doing the same thing, but he’s the only one I know of who’s purposely putting the ball in bad lies to see how it holds up.”

To give DeChambeau an accurate idea of what those numbers could look like from the rough at Winged Foot, Bridgestone’s R&D team added an adhesive and a light layer of moisture to the cover of DeChambeau’s Tour B X to simulate conditions from the rough with a swing robot. Rehberg also spent roughly 30 minutes early in the week at East Lake, during the Tour Championship, capturing launch monitor data as DeChambeau dislodged range balls from a small triangular strip of thick grass situated next to the range.

DeChambeau was willing to do whatever it took to get an accurate snapshot of the rough, without actually being on site at Winged Foot.

“I guess we gave him a really good comfort level of what to expect the ball to do from not only a visual and what you think it should do, but what it’s actually doing according to the data and standard deviation of those shots,” Rehberg said. “That’s the most important thing for him. We all do it — we’re standing over a shot in the rough and guessing. It’s 140 to the flag looks like a flier lie and I think it’s gonna go 147. It’s just a shot in the dark at the actual number. Bryson doesn’t want to guess. He wants a better hypothesis of what it’s going to do from every rough and situation. It was an interesting few days of testing. We learned a few things about what he was doing versus what the ball was doing.”

Rehberg wouldn’t divulge the end result of the findings — DeChambeau is notoriously tight-lipped when it comes to his major game plans and gear testing — but it’s fair to say the plan worked out. A U.S. Open trophy is the ultimate level of validation.

“We’re trying to help him develop that equation and tighten up the standard deviation of those results,” Rehberg said. “From those rough shots, he controlled them amazingly. Some felt his game plan was really aggressive, but he played it smart up the neck of those greens and hit it pin high instead of left and right deviation of hitting it tight. It really freed him up.”