Fully Equipped: 5 important takeaways from our podcast with Max Homa 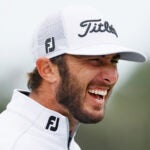 Max Homa is a two-time PGA Tour winner, professional podcaster, and one of the most popular social media follows in golf. He has insider knowledge, he’s a golf-swing roast master, and he has an infectiously positive way of thinking. Talk about the ideal podcast guest.

Recently on Fully Equipped, which is GOLF.com’s gear-focused podcast, Homa joined the show to talk mostly about golf equipment, of course, but he expanded on a newly found mental approach, too.

Below are 5 important takeaways from Homa’s guest appearance, each of which can help you play better and enjoy the game more.

1) Don’t be too quick to blame yourself

As we all know, the golf ball doesn’t always go where you intend to hit it. Bad shots are inevitable. When issues arise consistently with a certain golf club, though, it could simply be a problem with how the equipment suits you or the conditions, not necessarily with your swing.

“I think that I’m a little bit more keen, or at least aware of when something seems to be a shade off, to stop going to immediately blame yourself. Maybe the shaft setup has changed a little bit with your swing dynamics,” Homa said on Fully Equipped.

He continued, “Maybe I’ll be hitting a bunker shot at a new course and think my bunker game is just not good right now. And I get to talking with (Titleist Tour rep) Aaron Dill, who is one of the smartest people in golf, and he’ll say, ‘It’s not you, everyone’s been saying it’s too firm or too soft and we need to put a different grind on [your wedge].’ I’m trying to be a little more aware and keen to those aspects.”

The takeaway here is that it’s important to assess what the real problem is when things go awry. Have your driver shots suddenly started to spin too much? Are you hitting chunk shots with your wedges? If something is wrong, maybe it’s time to get with a trusted fitter or local professional to take a look at how your equipment is matching up with your particular needs.

2) Work on your mental game, not just your swing

Golf is often a puzzle that requires many parts to come together successfully. It’s easy to get wrapped up into swing mechanics to breed better performance, especially when you’re not playing up to your standards. Homa, however, has recently started to pay more attention to his mental approach, not just his actual technique, to make improvements.

“What I put into my physical game, I wasn’t putting into my mental game at all,” Homa said. “I wasn’t reading any books, I wasn’t practicing mental strength in any way. I wasn’t doing anything to grow there, but I was trying to do everything physically. I would get frustrated because I wasn’t tapping into my potential, but I wasn’t looking into this completely other avenue that I was missing.

“It wasn’t like I was in a horrible mood, but as my caddie called it, ‘we need to play golf a little more meat and potatoes.’ Just kind what Dustin (Johnson) was saying at Augusta, even before he won. He said, ‘I hit it, I find it, I hit it again. I’m going to hit good shots, I’m going to hit bad shots, but I’m going to have the same kind of outlook.’ So I got into this mindset that I was going to focus on my brain a bit more.”

Johnson wasn’t Homa’s only influence on his recent mental switch up. He also credits rapper Just Mike (formerly known as Mike Stud) for inspiration and guidance on a more positive way of thinking. On Fully Equipped, Homa explained that Just Mike has been a great guide for him as he deals with the “ebbs and flows” of becoming mentally stronger, more positive, and happier overall.

“It’s all based off being in the flow state and trying to get your brain in the best possible setting to succeed,” Homa said. “It’s about being positive and happy and in a good spot… just trying to be a little bit more conscious of expanding that part of not just my golf game, but my everyday life.”

Homa’s newfound approach worked wonders at the 2021 Genesis Invitational, where he overcame a missed putt and a bad break that would have derailed most other golfers, and maybe even Homa’s past self.

If you’re looking for more on Homa’s mental awakening, he joined Just Mike’s “Ya Never Know” podcast back in January. It’s worth a listen for anyone interested in going down the path of self-improvement.

3) Tilt with your driver to hit it higher

As Homa explains, you don’t need a different swing with your driver than your irons, you just need to make a small adjustment to your setup.

“If you change your setup a shade with driver, as most people in professional golf know, you obviously get a shade more tilted to hit up on it more than you would an iron; that helps get the ball up in the air,” Homa said. “I feel like there’s a lack of understanding there. I see a lot of guys who can hit an iron pretty well and then they get to the driver and can’t hit it, or vice versa.”

Instead of standing perpendicular to the ground when hitting driver, try to tilt your upper body away from the target so your shoulder line is pointing more skyward. This will influence an upward angle of attack, helping you achieve more height and less spin for greater distance.

Homa says a common mistake he sees golfers make is they try to hit bunker shots with the wedge face aimed straight at the target.

“The golf club is just not made to be setup like that for a bunker shot,” Homa says. “I took my wife – she never has played golf – and we went on the golf course for the first time ever awhile ago. She has hit some balls on the range, but has never really played golf. So we went in the bunker. It took her two bunker shots to get one out clean.”

Homa’s simple instructions to his wife Lacey were to open the face of the wedge, thus engaging the bounce of the club.

“I’m not saying she’s a world class bunker player by any means, but the whole point is I see people who play golf all the time who just chunk or skull a bunker shot, and it has almost nothing to do with their technique and everything to do with just the setup.”

To put this into practice, make sure the face of your wedge is pointing skywards when hitting bunker shots. It may seem scary, but the bounce of the wedge will ensure the club doesn’t dig too far into the sand, and the ball should come out high and soft.

Click here for more instruction on how to get your golf ball out of the bunker consistently.

5) Don’t be afraid to change up your putter

Homa, as he admits, hates to change putters. He had been playing the same putter for several years on the PGA Tour, but just prior to his win at the Genesis Invitational, Homa switched into a new Scotty Cameron Phantom X 11.5 putter.

Unhappy with his performance on the greens, Homa was testing different putters before the AT&T Pebble Beach, when Scotty Cameron Tour rep Drew Page offered up a new Phantom X 11.5 mallet design. After a slight adjustment to the topline of the putter, Homa had found his new gamer.

Even though he’s clearly not a fan of switching putters often, a new look and feel helped Homa find something he loved.

“Sometimes with putters, it just takes a good putting day or two to fall in love,” Homa said.

For amateurs, an important lesson can be learned here. If your putter has gone cold, or you’ve been getting frustrated on the greens, maybe it’s time to switch things up. Try out a few different designs, or go through a full putter fitting, to find a putter you love. Life’s too short to use a putter that you don’t like, especially if it’s not even helping you make putts. Inside Matt Kuchar's golf bag: 7 things I noticed while inspecting his clubs