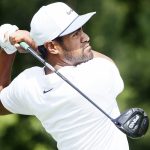 Tony Finau knows a thing or two about getting the most out of his equipment.

Throughout his career, PGA Tour winner Tony Finau has been one of the most exciting players to watch hit a golf ball. While his backswing is shorter than most of the longest drivers on Tour, Finau is no short hitter. In fact, from 2015-2020, Finau didn’t rank outside the top 13 in driving distance.

Not only a great driver of the golf ball, Finau also currently ranks 10th in Strokes Gained: Tee to Green, which is a stat that encompasses all shots hit aside from the putter.

On our recent Fully Equipped gear podcast, Finau joined the show to discuss a variety of topics, including his unique driver setup, his general approach to distance, a recent equipment change he made, and his vast Jordan shoe collection.

Of the topics discussed, two important points stood out that could help golfers everywhere. Continue reading for what you can learn from Finau, and make sure to listen to our full interview with Finau embedded below.

1) It’s not all about ball speed

When you look at a Bryson DeChambeau or a Wilco Nienaber, it’s easy to get wrapped up in ball speed. Tour players these days seem to be focusing more heavily on pushing the limits of distance and trying to find an advantage by achieving higher ball speeds.

On paper, Finau has well above average ball speed off the tee, averaging 178.27 mph so far in 2021. Compared to Nienaber or DeChambeau — players who push 200 mph of ball speed in competition — maybe 178.21 isn’t hugely impressive, but certainly nothing to scoff at.

According to Finau, though, he’s actually leaving an eye-popping amount of speed in the tank.

“With my standard length driver, 208 mph is my highest ball speed,” Finau told Fully Equipped. “I can get it well into the 200s…but if I live right around 180, which is what I say I do on an average drive on the PGA Tour, I can get 20-25 mph more than that. But, I never really use that on the golf course. If I knew where it was going I probably would, but when I take a full-length backswing, or even a little past parallel, I’m able to peak those numbers into the 200s. But again, I just don’t have the accuracy with that type of swing that’s required to play high-level golf, so I don’t use it.”

Finau is apparently sitting on aces when it comes to ball speed, but he knows that hitting the center of the face and controlling the ball is better suited for his game.

While most of his peers are cranking up the distance, Finau is dialing down, instead focusing his attention to the greens.

“You know, it’s amazing to see what Bryson’s been able to do, but a lot of these guys are just amping up now,” Finau said. “I’ve been toning back really since I was about 20 years old, trying to learn how to hit it straight, so I’m in a different mindset than most guys. I think for me, personally, the most shots I’m going to gain on the field is around the greens and on the greens, so that’s where I put my emphasis.”

While Finau has been using Ping’s Blueprint Forged irons since they were made available in 2018, he made a small but impactful change to the heads in December 2020.

Speaking with Ping Tour rep Kenton Oates in late 2020, Finau wanted a bit more awareness of where the club head was throughout his backswing. Finau likes to feel weight in the head so he doesn’t lose track of the face, thus helping him deliver the club more consistently to the ball.

As discussed in-depth in a previous Gear 101 article, “swing weight” is a measurement of how heavy or light a golf club feels to the player. Technically speaking, swing weight is measured on a 14-inch fulcrum that assesses the balance point of a club, which is displayed on an alphanumeric scale. The scale ranges from A0 (the lightest) to G10 (the heaviest), although most men’s golf clubs range from C7 to D7.

Of course, every golfer has different feels and delivers the club head differently. Not all of us are like Finau. So, how do you find what swing weight is right for you? According to True Spec fitter and Fully Equipped co-host Kris McCormack, swing weight is a matter of personal preference. There’s no “correct” swing weight, only a swing weight that feels best for you. McCormack encourages golfers to try out lighter and heavier weights with their fitter, or while capturing numbers on a launch monitor on their own. Whichever setup feels and performs best is the swing weight you’ll want to match with throughout the iron set.

In general, a lighter swing weight may allow for greater speed, but as Finau discussed, it could lead to losing awareness of the head throughout the swing. On the flip side, heavier swing weights may help with feel, but cause a loss in speed and increased fatigue over time.

Remember, no one cares whether your clubs are heavy or light, only if you get the ball close to the pin. So play what works best for you!