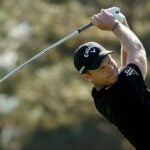 Danny Willett, the 2016 Masters champion, in the second round on Friday.

Danny Willett was cruising around Augusta National in his first round at this 2020 Masters, with four birdies against a pair of bogeys through 16 holes. Then came his tee shot at the par-4 17th.

The face of his three-year-old Callaway Rogue driver had given way.

With just two holes left to play, it didn’t seem like a big deal. Willett could swap in a spare before his second round commenced Friday afternoon.

“I tried,” the 2016 Masters champion said on Friday evening. “I’ve got a spare head, but it wasn’t as good, so we just thought we took the decision out and didn’t even put it in the bag for the second round.” That’s right, in a tournament where distance — in particular, the Herculean drives of Bryson DeChambeau — has dominated so much of the talk, Willett was going to willingly cede yardage to Augusta National and go without a big stick.

Then again, after five Masters starts, including that magical week four years ago, Willett knows his way around this place. The softer greens on Friday also influenced his decision.

“This golf course I play quite a lot of 3‑wood around here anyway. Always have,” he said. “This place for me has always been a second‑shot golf course, and especially with how receptive some of these smaller tiers are, it kind of made it a little bit easier. You’re coming in with 6‑iron instead of 8‑iron, your ball is still going to stop on the green, whereas in years gone past, that would have been a real big disadvantage.”

Instead, Willett made his driver-less strategy look like an advantage.

Averaging just 279 off the tee in his second round, Willett made six birdies, plus an eagle on 13, to post a blistering six-under 66. When dusk fell, he was at seven under for the tournament, just two back of the pack of leaders at nine under.

Willett now faces another vexing decision: Does he tinker with some new driver heads on the range Saturday until he finds a suitable replacement, or does he finish the tournament without the longest club in his bag? With ideal conditions and the SubAir pumping, the greens will surely bake out over the weekend, meaning the difference between that 6- and 8-iron Willett referenced will become more extreme.

“We’re going to have a little look,” Willett said, but if he can’t find a driver with which he’s comfortable, “we’ll end up just playing as we have done today.”

“It’s maybe not worth it so we’ll just have to wait and see.”

If Willett can put up another 66 on Saturday, it definitely won’t have been worth it.

The 1 aspect of Dustin Johnson's gear setup you should copy