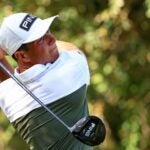 Sometimes, the backup is even better than the original.

Today’s Spotted on Tour is a lesson about preparation. If you’re going to compete in a PGA Tour event in a remote corner of the world (say, Mexico’s Riviera Maya, for the sake of argument), make sure you’re properly prepared before you hop on your flight. Don’t forget the essentials: underwear, socks, your clubs, etc. Also, don’t forget the incidentals: extra underwear, extra socks, and sure, extra clubs.

This column is also a lesson about trust. It’s a good thing to trust your friends. But that trust should have limits. For example, if you were to forget your incidentals to a remote place like Mexico’s Riviera Maya, you should be wary about lending your incidentals to your friends. Because if things go wrong, and your trusted friend should break your incidentals, well, then you’d be in a very unfortunate position. An exact position faced, coincidentally, by the subject of today’s Spotted on Tour, Viktor Hovland.

Hovland brought the essentials to Mayakoba this week, but he did not bring the incidentals. On Friday, as he and Danny Lee were on the range together, Lee asked to take a few swings with Hovland’s driver. Hovland, a trusting man, obliged. Then, tragedy struck: on his first swing, Lee snapped Hovland’s driver. In the fast-swinging world of the PGA Tour, these things happen often — drivers break, faces cave, the issues span the gamut. For these reasons, most players bring backups to the tournaments they attend. But as it turned out, Hovland did not have a backup.

So, the 24-year-old Ping staffer canvassed the range at the World Wide Technology Championship, eventually finding a replacement from James Hahn. Hahn’s Ping G425 LST driver was shorter than Hovland’s gamer, but beggars can’t also be choosers, so Hovland grabbed the club and got back to the range.

What followed next was nothing short of miraculous: back-to-back rounds in the 60s (punctuated by a Saturday 62) gave Hovland an easy, four-stroke win. The victory was the third of his professional career and easily the most dominant — a victory carried, in part, by Hovland’s replacement driver, which he credited for helping him navigate some of the narrower chutes and valleys at Mayakoba.

“On this golf course, it’s perfect,” Hovland told reporters Saturday. “Because I can get up on these tight holes and just kind of know that it’s going to go pretty straight if I just hit down on it a little bit and just flight one down. It’s been amazing.”

So, what’s the deal with the G425 LST? According to Ping, the G425 is its highest-launching and most forgiving driver — a unique marriage of both distance and forgiveness that makes it beloved among amateur players. For pros (and faster-swinging ams), there’s the LST, or “low-spin technology” model, which helps to lower spin rates and boost distance even further.

All of this brings us to our final lesson of Spotted on Tour: if you’re going to invest in a driver, perhaps it’s best to find one that can still bail you out, even while you’re busy learning lessons about trust and preparation. To learn more about the G425, check out the link below. OUR TAKE: Some drivers offer flashy distance, while others provide sturdy stability. Ping’s new G425 drivers, though, checked both boxes for our testers. In his first time hitting the Turbulator-crowned driver, one GOLF tester called the G425 “wife material” due to its speed and forgiveness. “All my mishits went straight,” another said. Players also found that the impact sound sings a deep, booming note.  THE DETAILS: By combining tech from previous releases, Ping says it was able to design its most forgiving driver ever with the G425 Max. No wonder why testers found its performance dependable. The G425 Max drivers measure a USGA limit 460cc and have a 26-gram adjustable tungsten in the back of the heads to help increase launch and forgiveness. For golfers with a slice, Ping offers the G425 SFT draw-biased option, and for higher-speed players who need reduced spin, Ping offers the G425 LST. Check out 150+ reviews from our gear experts in the ClubTest 2021 collection
Buy Now