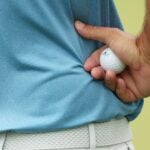 Brooks Koepka shakes it up

Less than six months after the ink had dried on a multi-year equipment deal with Cleveland/Srixon, Brooks Koepka shook things up in a big way at the U.S. Open, replacing his Srixon ZX7 driver and Z-Star Diamond golf ball with an older model TaylorMade M5 and 2017 Titleist Pro V1x.

The sight of Koepka playing non-Srixon gear led many to wonder if the deal was on the ropes. In the end, Cleveland/Srixon released a statement confirming they’d temporarily granted Koepka the chance to use both pieces of gear at The Country Club.

“In this early stage of our partnership, Brooks Koepka has validated the performance of the Srixon driver and golf ball,” a Cleveland/Srixon representative told GOLF.com in a statement. “Though performance has been promising, the characteristics are not a perfect fit, yet.”

Instead of requiring him to use a driver-ball combo that hasn’t been a “perfect fit,” Cleveland/Srixon confirmed they’re shifting the focus to yet-to-be-released products specifically designed for Koepka’s needs.

“To work through this adjustment period most efficiently, we decided to focus our energy on fitting Brooks into the next generation Srixon driver and golf ball prototypes that will debut on tour in the near future — products developed with Brooks’ input and needs in mind,” the statement continued. “While we get this organized in the next couple months, Srixon is temporarily allowing Brooks to use his previous driver and ball. Of course, he will continue playing Srixon irons and Cleveland Golf wedges. Both parties are fully committed to the partnership, and we are confident Brooks will be back in a Srixon driver and golf ball soon.”

With Srixon’s new driver and golf ball still in production, it’s very likely Koepka will continue to play a setup that helped him win a handful of majors when he arrives in Scotland for the Open Championship.

Rory McIlroy carried TaylorMade’s Stealth 3-wood around The Country Club last week, but he had another option (SIM Ti) waiting in the wings if conditions changed. The week prior to the U.S. Open, McIlroy used both of the 3-woods in his arsenal to win the RBC Canadian Open. After starting the week with SIM Ti, McIlroy switched to Stealth on the weekend when he needed a 3-wood that could work the ball.

With accuracy at a premium, McIlroy chose to stick with Stealth for the U.S. Open.

“There weren’t many opportunities for SIM last week,” McIlroy told GOLF.com. “If I need something that goes 310, the SIM is a good option off the tee. But if I don’t have that number, I’m usually laying further back and taking a 5-wood or a long iron. Last week was one of those weeks where I noticed there really wasn’t much of a need for SIM, which is pretty much a 2-wood for me, so I put in Stealth. I didn’t hit [Stealth] much anyway, but I thought it was a better fit over the weekend.”

According to McIlroy, he typically shows up to the course with both and then chooses the 3-wood that best fits the setup. As you’d expect, McIlroy’s 3-woods have different performance characteristics.

With an actual loft of 13 degrees, the SIM Ti carries over 300 yards for McIlroy with a spin rate that hovers around 2,700 RPMs, making it, as the four-time major winner called it, a glorified “2-wood” with very little movement. The Stealth, on the other hand, is moderately weaker at 13.75 degrees and carries up to 290 yards with a touch more spin — 3,100 RPMs on the draw, and 3,600 RPMs on the fade — and provides the ability to work the ball both ways.

Videos of dropping a ball into the rough have become a U.S. Open tradition. It’s a reminder that no matter how accurate you are, there’s going to come a point during the week where you have to take your medicine and hack it out. To reduce his chances of spending a considerable amount of time in the rough, Cam Smith worked with Titleist Tour reps to tighten his dispersion by going to a shorter driver length.

Smith had his Fujikura Ventus TR Blue 6X driver shaft cut down by a half-inch to 44.5 inches. Going shorter required Titleist reps to add approximately 4 grams of weight back to the head to account for the shaft length reduction.

Going shorter allowed Smith to find the center of the face more frequently during testing — something he’d struggled with in recent weeks.

Collin Morikawa carries several lob wedges with him to handle every concieveable course setup. But when it comes time to pick a setup for the U.S. Open, only one option will do — TaylorMade’s Hi-Toe (60 degrees).

“I tend to use the Hi-Toe at the U.S. Open because it gives you more surface area if you do miss it,” Morikawa told GOLF.com. “I’m able to chip it out of the rough or open the face up and know I can catch it off the toe and it’s still going to end up when I need it. It’s a great club for a bunch of different shots, which is why it always gets added this week.”

What makes the 60-degree wedge special, aside from the extended toe section, is a plethora of ZTP raw grooves that extend across the entire face, increasing the amount of zip each wedge is able to produce. Laser etching between each deep and narrow groove reduces skidding up the face and enables the ball to produce a consistent launch while generating more friction at impact for extra greenside spin.

It’s not a wedge Morikawa employs reguarly, but for at least one week each year, it’s the best option for his bag setup.

Draw-biased products typically don’t see the light of day on the pro circuit. There are exceptions to every rule (Keegan Bradley’s TaylorMade SIM Max D driver), but missing it left is usually a death-sentence for most pros. When Mito Pereira asked Ping Tour reps to find a 5-wood that looked and reacted like his G425 Max 7-wood, the initial thought was to start with a Max version and see if they could make it worth with some minor modifications.

After initial testing, Ping Tour rep Kenton Oates added a draw-biased Ping G425 SFT to the list of potential options. Yes, a draw-biased head. The decision behind testing SFT was simple: Mito tends to miss it right with 3-wood, so why not try out a lower lofted 5-wood that mitigates the miss?

After positioning the loft sleeve in the “Big Minus” — the change moved the loft from 16 degrees to 14.25 degrees — Pereira was able to get his desired distance and eliminate his regular miss with the draw-biased model. Problem solved.